My husband got a prescription for Viagra from our family doctor and he took it three or four times a month for 18 months," says Sue M. "But it sure wasn't worth taking for the damage it has done to his eye."

"I remember the first few times Don (not his real name) tried Viagra," Sue says. "Later that same evening, or the next morning, he felt weak and got really bad headaches and heart palpitations. This really puzzled us because he didn't take Viagra that often and nothing else could have caused these symptoms. 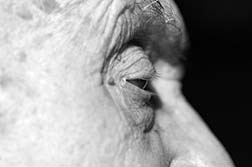 "Don was sitting in the living room one evening and he asked me if the TV reception was blurry. I said it wasn't. He covered each eye, back and forth, and the vision in his left eye was blurred. He put in some eye drops but his vision remained blurry.

We have an ophthalmologist acquaintance, so Don called him and went into his office the next day. Doctor John told Don that he had suffered a stroke in his eye—a vein occlusion. Don asked the doctor if it could have been caused by Viagra and he wasn't sure. However, our friend is a nurse at an open-heart surgery hospital. 'Don, Viagra isn't good for you because it opens up the blood vessels and could potentially cause you to have a stroke or heart problem,' she told him. She advised Don to see his family doctor.

Our family doctor ran a battery of tests. Don was 65 at the time and his cholesterol count was fine. So was his EKG, and every other test imaginable. Nothing has come back to correspond with this stroke in his eye.

In March of this year his eyelid started drooping and we went to a retina specialist. They gave him steroid shots but it didn't get any better. Then we went to Florida for the winter and saw another specialist. This time Don was given an injection in his eye that improved his vision.

But in June his vision got worse and his eye was drooping even more. We went back to Florida and the doctor gave him another shot, this time a steroid. Now his vision is gone completely in that eye and he has huge amounts of swelling all around his eyeball, including the lid and underneath, everywhere. Just a few days ago the retina specialist said he had so much swelling behind the eye they are going to schedule surgery, but it probably won't improve his vision.

After this surgery he has to get another surgery to get his eyelid lifted. My husband doesn't even look like the same man.

It was so disheartening, after that first injection improved his vision, and now his vision is gone. He never had a problem until he took that stupid Viagra. 'Really, is it worth it?' I questioned him. It sure wasn't worth it to me—and I don't mean it that way. I mean the way his eye looked.

I went online and there were so many stories about Viagra and how it has affected people's vision. All I know is that my husband was healthy and this has affected his whole life. He is a plasterer and he built a business on his reputation. It's really sad because last month he said 'I can't see to do any more plastering,' so now he has just about lost his livelihood.

All we can do is wait for the next few surgeries and hope it takes the swelling away. Chances of Don regaining his vision are slim to none."

If you or a loved one have suffered blurred vision or blindness after taking Viagra, please contact a lawyer involved in a possible [Viagra Lawsuit] who will review your case at no cost or obligation.
Request Legal Help Now