"I was 78 when I first took Viagra— the ads on TV made it sound so appealing," says John H. "Viagra promised to rejuvenate your sex life and I fell for it because at that time I wasn't able to do much anyway." Viagra failed to advertise the side affects and now John is pursuing a class action lawsuit because he is legally blind in one eye.

John started taking Viagra six years ago, both from the promising television ads and from his doctor's advice. "John had prostrate cancer and that is why our doctor recommended it," explains Imelda, his wife. "We saw it advertised just about every day—it was like we were brainwashed." 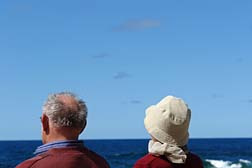 But about 18 months after first taking Viagra, and John took it about twice a week, his eyesight started to deteriorate. At first his vision was blurry and he had no idea why. "I kept thinking that my eyebrow was covering my eyeball but my wife said that wasn't the case," says John. His doctor referred John to an ophthalmologist; by that time his vision in one eye was almost gone. "It was like seeing black," he says.

"The doctor said blood was settled behind my eye," says John. "He had surgery to clear the blood from behind the retina but it didn't improve--they thought it could have been from a stroke but John didn't remember having a stroke," adds Imelda.

"Then we saw something on TV about Viagra but this time because it was creating problems such as bad vision and it advised anyone suffering eye problems to see your physician," says John. "I realized this drug had caused my blindness.

"When I found out that Viagra had done this to me, I was very sad, especially because there is nothing more the doctors can do to save my eysight. The only thing I can do now is sign my name to checks. My wife has to do everything for me.

I can't see anything in my right eye and I can only see a little from my left eye. I have to sit very near the TV and can't watch it for long—but long enough to see that Viagra is still advertised. They should take it off the market because I am not the only one suffering. To know that I can't ever read again makes me angry—I am now legally blind."


READ MORE LEGAL NEWS
More News
"I was angry because I didn't want John to use it in the first place--because of his age he should be satisfied with whatever he could do," says Imelda.

John and Imelda are both mad at the makers of Viagra, "Because when they advertised this drug- even though it worked--the side affects don't make up for it," says Imelda. There is no history of stroke in John's family and his vision was fine before taking Viagra.

"When I found out about Viagra and the side affects, I did some research online—that is when I found your website," says Imelda. "I know getting involved in a lawsuit isn't going to replace his sight but I think John, and others like him, should get some kind of satisfaction from this."

If you or a loved one have suffered blurred vision or blindness after taking Viagra, please contact a lawyer involved in a possible [Viagra Lawsuit] who will review your case at no cost or obligation.
Request Legal Help Now