Were you looking for Viagra Linked to Skin Cancer lawsuits?
En Español [VIAGRA CEGUERA] May 27 2005

Viagra was introduced in 1998 and had $1.68 billion in sales last year. The impotence drug has been used by 23 million men worldwide. 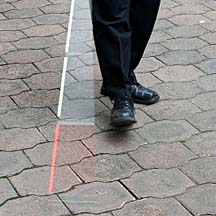 There are a growing number of reports of men allegedly losing their vision due to a condition called nonarteritic anterior ischemic optic neuropathy (NAION) while taking Viagra. There are also reports of intraocular pressure, retinal vascular disease and other eye complications. The drug's label currently has warnings about possible side effects involving eyesight, such as increased sensitivity to light and blurred vision.

Cialis (tadalafil) is an impotence drug similar to Viagra, produced by Eli Lilly. One of the main differences between Cialis and Viagra is that Cialis may work for up to 36 hours after ingesting. This has made Cialis a strong competitor for Viagra. There are also a number of cases of men allegedly losing their vision while taking Cialis. The US Food and Drug Administration (FDA) is currently investigating these Cialis cases.

Levitra is a prescription medicine manufactured by Bayer AG and GlaxoSmithKline that is also used to treat erectile dysfunction. Levitra is available in 2.5 mg, 5 mg, 10 mg, and 20 mg tablets. The drug is intended to be taken only when needed, but no more than once per day. The FDA is also contacted the manufacturers of Levitra in case there is a problem with the entire class of erectile dysfunction medications.

Viagra Victim Blinded
"I was 78 when I first took Viagraâ€" the ads on TV made it sound so appealing," says John H. "Viagra promised to rejuvenate your sex life and I fell for it because at that time I wasn't able to do much anyway." Viagra failed to advertise the side affects and now John is pursuing a class action lawsuit because he is legally blind in one eye.

FDA Officer: Viagra Reports Kept Under Wraps
More than 13 months before the Journal of Neuro-Ophthalmology reported that Viagra had been linked to a rare form of blindness, a Food and Drug Administration (FDA) safety officer reported the same findings, based on monitoring the agency's adverse event reporting system.

Viagra, Cialis and Levitra in the News

OCT-19-07: Viagra, Levitra, Cialis, and Revatio are about to bear new warnings that user may experience sudden hearing loss. The FDA decided to add a warning about the possible risk after counting 29 reports of the problem since 1996 among users of this family of medicines. The impotence drugs Viagra, Cialis and Levitra will bear the warnings. So will Revatio, a drug for pulmonary hypertension, which contains the same ingredient as Viagra. Viagra's label already mentioned hearing loss as a possibility, because a few cases were reported during initial testing of that drug. [YAHOO: VIAGRA HEARING LOSS]

AUG-02-07: On July 8, the FDA approved new labeling for Viagra, Cialis, and Levitra to reflect reports of sudden vision loss. That vision loss is attributed to a blockage of blood flow to the optic nerve. [NEWS: VIAGRA, CIALIS, LEVITRA]

AUG-01-07: A man has filed a lawsuit against Pfizer alleging he suffered a stroke in his eye after taking Viagra. The suit claims Pfizer did not warn patients about the risk of vision loss. [POST: VIAGRA]

APR-30-07: Despite drugs like Viagra being linked to serious side-effects, commercials do not always have to list side effects. The ads are called reminder ads, and as long as they do not state what the drug is used for they also do not have to state negative effects. [ NEW YORK TIMES: VIAGRA]

MAY-31-05: Pfizer faces class action lawsuits after claims that their impotence drug Viagra could cause blindness. Lawyers are ready to build class action cases against Pfizer. [
Stay Informed
Get the latest on class action lawsuits, settlements & more! Subscribe to our free weekly newsletter.
Get our Newsletter!
Submit a New Complaint
Been wronged by a similar product or service?
Click here to send us your complaint.
RELATED NEWS
More News

I am a Healthy 55 yo Emergency Medical doctor who takes Viagra as needed and two weeks ago, about 24 hours after taking Viagra I woke up blind in my L eye and was subsequently informed that I have AION ( non arthritic type) and Viagra toxicity is likely( as I have no other medical conditions ). Do I have a case against Pfizer?

Posted by
Tom Brotherton
on September 1, 2016
I'd like to sue both Viagra and Cialis who make the pills I get from the VA. I'd like to sue them for false advertising since I have never had a four hour hard on after all the pills I've taken.
Posted by
Earl Godbee
on April 9, 2016
I have been an active user of cialis and viagra for over seven years. I have recently notice a loss of vision in my left eye, making it difficult to read text on the computer, books, signs while driving. I am currently being evaluated by a eye specialist for blindness in that eye. I am unable to work because my work involves intensive reading and computer usage.
Posted by
Ontario
on February 27, 2015
Legally blind in both eyes.
Posted by
California
on September 2, 2008
I had then been diagnosed with retinopathy. I used cialis in 2004 and bled in the right eye and then was told that i was allergic to both drugs and the bleeding may have been caused in both eyes by the drugs. I have had no other bleeding in either eye since the surgeries and I bled right after use of the two drugs both times.