Larry and Eve Peter are in the process of filing a claim with CertainTeed. "I haven't sent in the application yet but from what I am hearing, it is going to be one big hassle," says Larry Peter, "and I'm hoping for some warmer weather so I can get on the roof." According to the claim form, at least two defective shingles have to be returned. "And if you can't get up there yourself, CertainTeed says they will pay $50 to a contractor if a default is found." If CertainTeed's shoddy warranty is anything to go by, that's a very iffy 'if'.

"When I was cleaning the lee side of the gutters, lots of shingles were loose," says Larry. "Then I noticed a number of hairline cracks and some curling and there also appears to be some bubbling. I contacted our builder and the supplier of the shingles (the house is only seven years old) and they both indicated that there were lots of problems with CertainTeed shingles. And they both told me that there have been lots of complaints with CertainTeed shingles. I also checked with my son who works construction. A guy he works with is experiencing the same problems—just about anyone in construction knows that these shingles are useless. 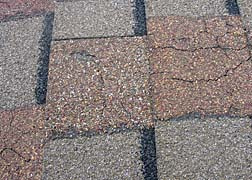 "I contacted the lumber company and he told me to get the paperwork—the claims forms—from CertainTeed's website. I see this whole claim thing as a double edged sword: the way I understand it, if CertainTeed decides to settle with me, they would probably prorate: their shingles are supposed to be good for 25 years and we have had them for seven years. From what I understand, they only pay for the material, not the labor. Currently the prices I have been quoted to replace those shingles--including tearing off the old shingles and installing new with all the new materials--would cost more than $6,000.


READ MORE LEGAL NEWS
More News
You can also do an overlay—where you can lay new shingles over the old ones—but my son told me that the problem is this: it would void the warranty on the new shingles. This whole mess has really caught me off-guard. I am totally shocked with the contacts I have had with builders in lumberyards: they know CertainTeed is a bad product and they have been instructed to tell their disgruntled customers to complain directly to CertainTeed. Evidently they are sold under a number of brand names and we have the Horizon shingle. But it is made from the same cloth as CertainTeed. A key issue is that the shingle is organic-- made with cardboard and covered by asphalt. Newer shingles now use a fiberglass core.

I contacted the Iowa attorney general's office and they suggested that I look up a website to investigate a class action lawsuit, and they recommended [LawyersandSettlements]. They were well aware of CertainTeed and its defective products."

Posted by
Tim Pierce
on October 16, 2017
Of the 100 or so houses built between 2003 and 2006 in my neighborhood in Ridgefield, WA that have the same CertainTeed Landmark series shingles on them, at least 60 of them have some visible defect from the ground without close inspection.