CertainTeed Shingles Failing, Leaving Homeowners Out in the Rain


The cool thing about a blog is that it serves as an on-line diary or journal. In the case of defective CertainTeed shingles, various entries undertaken by a host of consumers pouring out their troubles opens up a window into the lives of frustrated homeowners faced with repairing, or replacing a roof well before its time.

CertainTeed is a well-known manufacturer of shingles and other roofing products, and did not appear to suffer any prior adverse reputation beyond potential complications brought on by wind and weather, and in some cases a bungled installation by an independent contractor.

However, a bad batch of shingles manufactured sometime in the 1990's appears to be coming back to haunt the company, and it has left a large collection of well-meaning homeowners caught between a rock and a rainstorm. 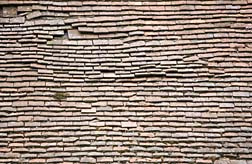 One homeowner blogged back in 2005 that his roof was only eight years old when it started to fail. They had built their home new, and ensured the roof was properly ventilated, and to their knowledge it was properly installed. There did not appear to be any weather issues that may have contributed to the failure, and three independent inspectors came up with the same answer: shingle failure.

The homeowner attempted to contact CertainTeed and applied for compensation based on the product's 25-year warranty, filled out the required paperwork and even sent in samples of the failed shingle, as required. Weeks later an answer came back: the company was prepared to do nothing to help them.

It's one thing to deal with a roof failing before its time—imagine the frustration if you are trying to sell your house in the midst of that failure. This is what happened to a Wisconsin resident who blogged in 2004 that his roof was failing after only seven years. He had a buyer lined up for his house, but he wouldn't be in a position to close until he got the roof situation resolved.

Another homeowner blogged that it took him seven months to settle a claim with CertainTeed.

By and large, bloggers have varying opinions on the CertainTeed product. Some suggest that it's a good company, but they had a bad run of shingles, and therein lay the problem. Others suggest that CertainTeed shingles are crap, and they will never buy them again. One contractor said that he took care to make sure the shingles were installed correctly, and that vents in the roof and at the eves were all correct. And yet, a roof that was 10 years old looked three times that.

Some found customer service slow, but thorough in the end. Others felt that the company was a pain in the end. One industry insider suggested that the initial denial of a settlement or re-imbursement is often considered protocol by some companies, given the expectation that once denied, a homeowner will simply give up and go away. However, persistent claimants will usually receive something. The old adage of the squeaky wheel getting the grease, applies here.

Ultimately, the problem with a roof is that it's something most of us can't do ourselves. We either don't have the skill, or the strength, or the guts to work up so high.

And for most, a roofing job is a multi-thousand dollar expense that you need to budget for. Hence the temptation to subscribe to the suggested warranty. There's a certain piece of mind that comes with buying a 25-year or 30-year shingle, and if you just read the literature, you could easily be left with that impression.

However, most people know that a roof usually won't last that long with todays' shingles. Depending upon the climate and individual weather factors, a roof might be expected to last 16 to 18 years. That's not exactly 25 or 30 years, but most professionals would agree that 16-18 is realistic, barring any high-wind or significant atmospheric event, or a botched installation job.


READ MORE LEGAL NEWS
More News
Not only is a roof that begins to fail three, four or even 10 years after installation (and way too early on all counts) serve as a far cry and a laughable departure from that stated 25 or 320-year warranty—in some cases homeowners faced with fixing, or replacing their roofing sooner than expected may not have completely paid for the current one. Therefore, replacing a roof well before its time may be far more than simply an inconvenience. It could be the source of financial hardship.

There is a general perception that roofs are not lasting nearly as long as they once did decades ago, which begs one to wonder if the overall quality of roofing product is not what it once was, in an effort to cut costs and boost profits.

That remains to be seen. However, in the CertainTeed case, a bad batch of shingles should not be borne by a consumer believing they were acquiring a quality product.

If your CertainTeed roof is failing well before its time, and fixing or replacing it will cause you undue financial hardship, make sure you pursue every option at your disposal, in an effort to make it right.

I replaced one Horizon roof installed i installed May 1994. The homeowner called me 4 1/2 years later saying the shingles were curling in the winter. She had full 100% coverage for labor and material which was Certainteeds Warranty at the time.

It wasnt that bad in my opinion, but i put the ladder up, checked the seal and about 10% if the shingles were NOT struck together. Two layers of old shingles were removed prior to installation of the new roof. Standard 15# felt and ice & water shield membrane were used as well. The roof was hand nailed as well.

We filed the neccessary paperwork before the five year deadline and she got new shingles (she opted for LANDMARK) and full labor coverage.


I remember not liking the small dots of self sealing asphalt on the Horizon. Too thin and small to be effective. Certainteed used a heavy amount of sand (not granules) as the backsurfacing which i disliked as well.

I was a Certainteed "Master Shingle Applicator" and "quality Master" at the time. (these are BS open book "tests") showing i studied and understood the products and installation techniques. They were supposed to be used as a sales aids/promo by me. I took the tests just to broaden my knowledge of shingles, not as sales aids. I am a rare "lifer"in the trade having taken over my dads roofing business at the age of 20 in 1988. I was not into "marketing and expanding" my business. I just wanted a quality product i believed in and would stake my reputation on. If there was a problem with the roof, im the one getting called, not Certainteed!

I did most of my Horizon roofs in the mid 1990's. Ive gone back to homes i used them on, not on callbacks, but to do other work, clean gutters etc. My beef was that the "overlay" color tab was "alligatoring" (surface cracking). My belief is that the asphalt used to glue the overlay granules on was of poor quality and applied too thin. Horizon was developed in the 1980's made to simulate more expensive laminated architectural shingles.

My suggestion to homeowners is be very persistent with Certainteed. Tell them you are going to tarnish their name and do it. Get the word out how displeased you are. Tell your friends, tell your neighbors! Be active with social media. Give them a bad name. Once a reputation is ruined is hard to get it back.

PLEASE dont blame your roofer. We are just the "middleman". Like the waitress serving the meal. Had i known what would happen i NEVER wouldve sold them. They were not the "cheap" shingle at the time.

I have a repeat customer who wants me to use certainteed Landnark on her current house. She liked the color i used in 2002 on their old house. I cringed when she asked.

Posted by
minda barber
on October 8, 2011
My house and garage have the 30 year New Horizon shingle from Certainteed installed in may of 2004 and i recently had my house resided and the contractor informed me that the shingles were really bad that would maybe last a one more wisconsin winter. now i need a lawyer or two really huge tarps not a happy camper ! which i might be living in soon.
Posted by
Michele
on March 8, 2011
My roof is only 1 and 1/2 yrs old and look almost like the pic above it was a total reroof with New ply-wood and All it All came from a company that supply our Roofer with Good Old Certainteen Produtcts we now have Mold on the Ply-Wood, Ply-Wood lifting OFF the beams of our Roof, Shinngles lifting so bad you can put your hand under them. Inside my house I have Mold in every room from water dripping from my New Roof sheet Rock falling But yet the inside of my house is NOT covered because it can not be proving that the Roof did the damage!!! REALLY I have two kids I really threw water up inside my house so I can have Mold threw out my house and have sheet rock falling down on purpose.. I paid $6,200.00 the first time for my roof it is going to cost double or more to fix this time I have tarps inside my attic to cover my things to keep them from getting wet..
PISSED OFF
Posted by
Sandra Smith
on February 17, 2011
We just received our settlement from Certainteed. The claim was filed in June 2010 and it is only 1/5 of the price we paid originally to have the shingles installed in 2003! How unfair! Why did we have to come up with the rest of the money to have the shingles replaced when we had a warranty (which we just did in November 2011)? We do not have an unlimited budget for another roof replacement since I thought we were covered for 25 years. My husband recently retired so we are a one income family and we had plans for that money. Is there any chance of appealing their settlement and trying to get more from them?