There's an implied positive in the CertainTeed name, a suggested strength. Certain. It's a word linguists will describe as definitive, focused, assured. Sadly, these adjectives do not extend to various lines of CertainTeed shingles that have proven to fail prematurely, causing homeowners no end of frustration—especially when it costs them more out-of-pocket to replace a roof, or repair water damage.

CertainTeed is a proud company with a long history of manufacturing shingles and other roofing products. However, it is alleged that the company used a different chemical in the manufacture of some lines of shingles in the early-to-mid 1990s—and these shingles appear to be failing sooner than their normal life expectancy might suggest.

Some consumers have complained that their shingles are failing after ten years or so, and a few are failing sooner than that. One contractor in his blog talked of a CertainTeed roof that was beginning to fail after just three years. 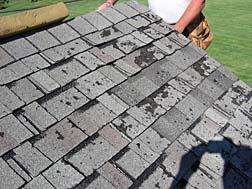 Most people know that typical asphalt or fiberglass shingles—even the 30-year variety—will not last nearly that long. Yes, there is some prorated warranty coverage for most, if not all of that period. But the further along you go and the greater the age of the shingle, the value of the warranty descends in kind.

Additionally, it is presumed that shingles are rated using best-case-scenario conditions: there's always decent weather, they're always installed to pristine standards, nobody ever walks on them to crack the base or break the seal.

Weather injects so many variables, and depending upon the climate in which you live, and the kind of temperature fluxuations you might see in any given year, chances are good your roof will not last the full 20, 25 or 30 years.

Most, with 25-year shingles, might expect to look at a full roofing job after 16 or 17 years. That's reality. C'est la vie.

However, you should not be looking at having to replace your roof after ten years, or fewer. Unless your roof wasn't installed properly in the first place, or you have been subjected to some horrendous weather (high winds, hail) a roof failing well before its time would have the quality of the shingles as primary suspect.

It is alleged that CertainTeed knew, or should have known about a manufacturing defect stemming back to the 1990s that would have impacted negatively on the long-term performance of the shingles.

As well, the CertainTeed purchase of Celotex early in the decade could also be a factor. One disgruntled homeowner posting on a blog back in 2004 indicated his roof, clad in Celotex shingles, was beginning to fail after four years. He noted that it was his understanding the Celotex 25 Dimensional shingle was discontinued a few years after the shingles were installed on his home.

It's hard to track the diligence of homeowners when it comes to their shingles, and the warranties inherent with the product. While the roof remains one of the single-most important assets protecting not only you and your belongings from the rigors of nature but also shielding the home's structure from the elements, most homeowners don't give it a second thought. Out of sight, out of mind—until the leaks start.

Shingles have warranties, but how many people keep the paperwork? And is the warranty transferable? Most are not. If the roof was installed before you bought the home, you may be out of luck attempting to make a warranty claim.

There is sufficient concern over CertainTeed shingle lines that lawsuits are being considered. At issue are shingles falling within the Horizon, Hallmark, CertainTeed, and Independence brands, manufactured in the 1990s.

Any paperwork on the existing roof—assuming you did not build the house or have the roof installed—would note the shingle manufacturer and particular line. Otherwise, it would be prudent to have the roof professionally inspected, and ask the inspector to locate the manufacture stamp on the shingle, usually located on a length of plastic film adjacent to the center adhesive strip.

You and the inspector will be looking for excessive degradation of the protective granules, cracking and curling that would defy the age of the shingle.

You'll also want to take lots of pictures if your roof is dying well before its time and you're considering the possibility of making a claim, warranty or otherwise. If there's a loose, or detached shingle that reflects this degradation, hang onto it.

The reason for the documentation is simple: if your roof is sick, you may not be in a position to wait for a warranty, or legal claim to go through. The heavy seasonal weather is coming, together with spring rains and snowmelts. If your roof is compromised and not addressed quickly, you could be looking at even more damage to your home's structures down the road.

You might try contacting the manufacturer, but they can often drag their heels. Some have reported endless calls to CertainTeed, with little or no response. And roofers prefer to avoid the cold and the snows of winter to install a roof.

You may need to take matters into your own hands and have your roof fixed, or replaced now—and it may be prudent to do so.


READ MORE LEGAL NEWS
More News
However, legal minds advise you to keep an accurate accounting of things: a log indicating your attempts at contacting the manufacturer, and their response (if any). The inspection report, together with all photographs and samples of the degrading shingles, if possible.

You are also advised to send a registered letter to the manufacturer, spelling out the problem(s) in detail, the existence of a professional and unbiased inspection, and the recommendation that time was of the essence to avoid serious damage. That way, the manufacturer to whom you might lobby for compensation later, does not retaliate by claiming the evidence was needlessly destroyed, and they were not informed.

Keep an accurate accounting of things. Save everything. Write down everything.
And if your roof has failed prematurely without just cause, know your options and know your rights.

Don't let them rain on your parade—or in your living room.