Thousands of homes have been condemned due to oil damage. Farmers' crops have been destroyed and the health of livestock has been compromised. Massive "fish kills" have occurred, with hundreds of dead fish washing ashore.

"The oil and the industrial chemicals that the refinery used have all seeped into the ground," says one environmental consultant. "This will impact the water table [drinking water] and the quality of the soil, even air quality. It's a huge mess, and it will take a long time to clean up." 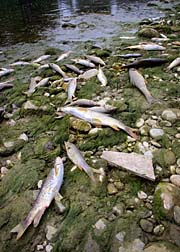 Steve M., (not his real name) is a Tulsa-based environmentalist who has spent weeks surveying the scene. He fears that the situation could turn into "another Love Canal," referring to the industrial toxic waste that has, over the decades, allegedly led to thousands of cancer deaths in the Love Canal community in Western New York.

"Like Love Canal, we have a company [the refinery] that is looking to conceal its environmental 'footprint' on the community," says Steve M. "This means that the real impact of the oil spill is being downplayed, and public health may suffer as a result.

"I don't see proper safety measures being taken. Maybe they would say they don't want to create a 'public panic'. But is the company really concerned about panic, or just protecting their reputation?

"Residents are being allowed back into their homes when there is no clear assessment of the dangers, posed by lingering floodwaters, oil and chemicals. Panic or no panic, this should not be allowed."

Fertilizer Plant Raises Concerns
Sue Casteel, a spokeswoman for the Agency for Toxic Substances and Disease Registry, who worked on flooding issues in New Orleans after Hurricane Katrina, said that public health concerns are similar in any area where there is extensive flooding.

Like in many floods, water and soil samples from Coffeyville that showed very high levels of fecal coliform, but they also show chemicals, indicating the water was contaminated with oil.

"Flooding poses a lot of the same hazards regardless of whether or not it is associated with a hurricane or flooding like we had in Coffeyville," Casteel said. "The difference is the oil refinery released oil as well."

Steve M. added, "Oil on its own can be a health risk, but I am more concerned about the acids and other chemicals used to process the oil. There is anecdotal information about paint being stripped off cars, and of an explosion around the time that the levies broke.

"What might have caused an explosion? Wouldn't you know: there's also a fertilizer plant near the refinery..."

Low-income Residents: "Zoning Victims"
Community activists note that the refinery and fertilizer plant were built in a low-income neighborhood, and that a "buffer zone" was created around the refinery site. Over the years, complaints about odors and other issues have largely been ignored by the city government.


READ MORE LEGAL NEWS
More News
In situations where a wealthy company is involved, low-income citizens often must turn to the courts, because local government does not respond to their concerns. Not surprisingly, class action lawsuits have been filed by many Coffeyville residents whose homes have been threatened by the spill.

Refinery on the Defensive
The refinery has hired The O'Brien's Group, which worked on the Murphy Oil spill in Meraux, La., after Hurricane Katrina, to help recovery efforts in Coffeyville. As well, it has published a series of advertisements in local papers promising to remediate the situation.

Steve M., for one, isn't buying the company's line: "It's a public relations move for the company. But what is being done to protect the residents? They are being allowed to literally wade into the toxic waste."

Next Week: The Cleanup Scandal. Just where is all that toxic waste being dumped? Hint: It may be right in your back yard.