Victims of a 71,400-gallon refinery oil spill at the height of Kansas' recent flooding have finally been allowed to return from emergency shelters to inspect their homes. Unfortunately, the Kansas oil spill left many of their homes condemned, the contents caked in oil and toxic sludge.

Placards Indicate Homes "Condemned"
Environmental assessors have installed placards on each home in the Coffeyville, Kansas area. A green placard means the house can still be lived in; orange means that damage can be fixed (but residents can't live there until it is); and red means the home has been condemned. Residents held their breath as the community bus carried them towards their town. 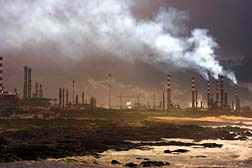 Robert Foster saw the bad news as he approached his home. A red placard -- "uninhabitable" -- had been posted on his front door. "It's condemned," he said. "I knew it was going to be condemned. I knew I'd never move back in. I knew everything I had was gone.

In some houses, oily mud covers the carpets, walls and furniture. Rivers of oil continue to run through houses and yards. Angela Alvarado looked around at the oil and sewage that covered her home. "There's nothing to salvage. It's horrible," she said.

Eyuler Brown summed up the feelings of many residents -- she was simply overwhelmed. "I'm 80 years old, I can't take this," she said. "I don't want to leave Coffeyville, but how am I supposed to clean this?"

EPA: Long-Term Impact to Region
According to the U.S. Environmental Protection Agency (EPA), crude oil spills can cause devastating physical effects, such as coating animals and plants with oil and suffocating them due to oxygen depletion. Crude oil spills can also catch fire, and may form toxins that linger in the environment for many years.

It is too soon to gauge the depth of the devastation, but EPA agents are on the scene assessing the damage. The Oil Pollution Act of 1990 mandates that the responsible party be held liable for containment, cleanup and damage costs in the wake of oil spills.

Meanwhile, lawsuits are being filed by residents against Coffeyville Resources Refinery, alleging that it did not take adequate steps to secure its facilities, despite warnings about the impending floods.


READ MORE LEGAL NEWS
More News
Oil Prices Rise
Oil analysts have reported that since the refinery is not expected to resume production for the rest of the summer, some wholesale gasoline prices will have increases of 20 to 25 cents a gallon. Midwestern states will see some of the highest prices in the nation for gasoline and diesel this summer, according to industry experts.

Tom Kloza, publisher and chief oil analyst at Oil Price Information Services said that the refinery will most likely not be able to operate until some time after Labor Day. This will be a particular hardship for farmers.

"It is going to be tough losing the two biggest demand months of the year, and you have to hope to be back in shape for diesel production when harvest time comes back," said Kloza.