As the floodwaters recede, a thick, dark line can be seen snaking through the town of Coffeyville, Kansas, a reminder to residents that cleanup from the recent flooding and 72,000 gallon oil spill has just begun. 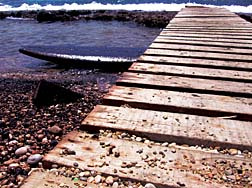 While oil and toxins sink deep into the soil and water, the long-term impact of the disaster is also sinking in for residents and their elected representatives. Surveying the black sludge that clings to the modest homes in this community of 11,000, state Senator Dwayne Umbarger (R-District 14) said: "Whatever's on the outside is on the inside -- that's really the bigger concern of mine."

EPA Describes Early Cleanup Efforts
Many Coffeyville homes are slated for demolition; others will require major efforts to remove contamination. In some cases, the soil in yards and farm field can be aerated and treated with natural biological agents that allow the oil to degrade. In other cases, soil will have to be removed and replaced before crops can be grown or children can play in their yards.

Regarding contaminated soil in Coffeyville, US EPA regional public affairs director Rich Hood said: "There's no way to clean that up other than scooping it up and replacing it with good soil."

"Our lawyers and lawyers for the company are in serious discussions about what steps the company will be required to take for cleanup," said Hood, adding that the EPA, "will get to the bottom" of what caused the refinery leak.

The refinery does not yet have a timeline for reopening.

Contaminated Soil: Where Are They Dumping It?
With tons of waste from condemned homes and other property, the refinery has hired a reconstruction company with experience cleaning up after Hurricane Katrina. At a recent town hall meeting, some residents applauded refinery officials for their efforts; other citizens were more skeptical. One local farmer, who said oil reached 4 feet in height on his land, lost about $50,000 in crops and now faces the specter of contaminated soil.

Down on Main Street, another Coffeyville resident asked: "They're lugging [the waste] away, but where's it going? Are they just going to dump it back in our backyard?"

The resident saw what she believed to be oil-stained asphalt being dumped into an abandoned quarry at the edge of the city. "That quarry's near the river," she said. "I'd like to know if FEMA is keeping an eye on where people dump [contaminants].

"If it's in a poor neighborhood, do they still care?"

Toxins Linger for 60 Years
Citizens are concerned that without a properly-monitored cleanup, the contamination could impact the community for decades, citing other instances of long-term contamination from oil spills.

For example, the New York Times reports that Exxon Mobil is still cleaning up contamination from a 1950 spill in the Greenpoint section of Brooklyn.

"Toxic contaminants include oil, benzene, arsenic and lead," the Times reports, adding that a lawsuit was filed earlier this month by the New York attorney general's office to compel a faster cleanup for the 57-year-old disaster.

READ MORE LEGAL NEWS
More News
Kansas officials have cordoned off Coffeyville after emergency workers began to show signs of illness. Residents are advised not to return to their homes, despite earlier visits being allowed by the authorities. Guidelines are based on the fact that exposure to oil-spill-related toxins can affect the nervous system, blood and kidneys. Studies have also shown that workers in the petroleum industry have higher rates of certain cancers.

The working class residents of Coffeyville, their homes destroyed, may have little sympathy for New York-based financial giant Goldman Sachs, which owns the unit that manages the Coffeyville refinery. Goldman Sachs is feeling the heat, as it had planned to offer an initial public offering (IPO) of Coffeyville Resources stock in the coming months, before the oil spill shut down the refinery.

It looks like those plans have probably also been trashed.