"We'll be drinking bottled water for the rest of our lives after this environmental disaster," says Kansas farmer John Mackie. "The Coffeyville Resources Refinery admitted their mistake but what good does that do?" The Kansas oil spill has left many people homeless and many more, like John, worried and angry. 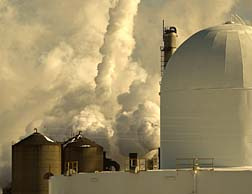 "The refinery took 24 hours to shut down--they waited too long to shut it down properly," explains Mackie (not his real name). "They left a valve open and spilt 71,000 gallons of oil into the flood waters. The waters then flooded the town and wiped out the entire east side of Coffeyville

"You can see an oil line on the south side of people's homes and a whole lot more oil sludge inside their homes. And there's other toxic waste—anything that was inside that refinery, including acid. Everything escaped -- some really bad stuff escaped.

People are getting rashes, nausea and diarrhea. The Environmental Protection Agency (EPA) is forcing people to go into their homes to take out all their belongings because the homes are going to be torn down. This isn't right. A lot of people are elderly; they have to wear rubber boots to go inside --these chemicals can eat the soles off your shoes-- and they can't do it themselves.

About 600 homes in Coffeyville were affected and half of those have been condemned; there are probably more homes condemned outside town. Oklahoma is a whole other ball game."

The repercussions of this disaster are enormous. All this pollution washed downstream and it got into farmland, including corn and soybean fields. The EPA told the farmers to mow down their crop, bail it and put it someplace where nothing can get to it. And after that, till the soil—to aerate it. But it will still be polluted. The next crop will take whatever is in the soil up in its roots. As for pasture land—we have been told to keep cattle off it.

In some places where Bermuda grass was growing—like the grass on your lawn—it killed it down to bare ground. Where the grass wasn't mowed it is growing like crazy; so that indicates anhydrous ammonia—a heavy duty fertilizer--went downstream as well. If water samples were taken, (and this water will find its way into the Tulsa water system) I would suggest it would be very high in nitrogen.


What Happened to Coffeyville Residents?

"The refinery has done an extremely good PR job: they are going to buy 300 condemned houses over the appraised value because they know what is in them. They will tear them down and the land will basically become a wasteland. There is already a housing shortage in Coffeyville. This is a low-income area and these houses were pretty much owned by people with minimum-wage jobs.


READ MORE LEGAL NEWS
More News
Most of these people are now living with family or friends; a lot of them have lost their jobs because they have no place to live—they just disappeared here, there and everywhere. There is already a housing shortage in Coffeyville and there are plenty of job opportunities here (amazon.com has 200 jobs that can't be filled) but they have lost employees that had to move away. People can't work here without living nearby.

What a dilemma. My house is okay but we were without water for a week. Our livestock suffered and a few of our animals perished.

Through your site, I filed this lawsuit because I wanted to get publicity for those people who lost their homes. The president declared the county to the east and west a disaster area and all they had was flooding, but here we have a major pollution problem from a refinery and he didn't declare our county a disaster area until forced to—enough of us got together and forced the issue with FEMA. Now we have to get together on a class action lawsuit against the refinery."