Residents of Coffeyville, Kansas are dealing with two environmental disasters at the same time. The first disaster is a flood that has overtaken the town, in some cases flooding homes up to their rooftops. The second disaster is the thousands of gallons of crude oil that allegedly spilled from the Coffeyville Resources Refinery and is now being carried through the town along with the floodwaters. 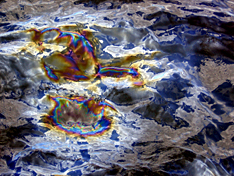 The oil spill was allegedly caused by a malfunction that occurred while the refinery was preparing to shut down and evacuate for the flood. Apparently, a pump at the refinery pushed oil into a storage tank until the tank itself overflowed. The spill has sent foul-smelling water into homes and businesses and left a thick sludge in areas where water receded. Some homes and streets are now coated in oil.

Initially, the refinery said the spill amounted to at least 40,000 gallons. However officials have said they do not know exactly how many gallons of oil were actually spilled.

Meanwhile, federal and state officials are monitoring the situation as the oil makes its way to drinking water sources. The U.S. Environmental Protection Agency has teams on the scene and says it will help with the clean up. The contaminated water has strained drinking water supplies so bottled water is being shipped in for area residents.

Residents of Coffeyville have been told they cannot yet return to their homes because of contamination. Some people who went into the flood zone allegedly became ill and reported suffering from rashes and diarrhea.

Officials are also warning people to avoid the floodwaters; however that warning has not helped pets in the town. At least eight dogs have been rescued covered in oil.

Coffeyville Resources is a 108,000 barrel-per-day refinery. The refinery is owned by CVR Energy Inc., which is a unit of Goldman Sachs and the Kelso Funds.

Kansas Oil Spill: Coffeyville a Potential Wasteland
"We'll be drinking bottled water for the rest of our lives after this environmental disaster," says Kansas farmer John Mackie. "The Coffeyville Resources Refinery admitted their mistake but what good does that do?" The Kansas oil spill has left many people homeless and many more, like John, worried and angry.

Kansas Oil Spill's Long-Term Impact: Where is the Toxic Trash Going?
As the floodwaters recede, a thick, dark line can be seen snaking through the town of Coffeyville, Kansas, a reminder to residents that cleanup from recent flooding and 72,000 gallon oil spill has just begun.


Kansas Oil Spill in the News

AUG-07-07: An ammonia leak at a nitrogen fertilizer plant next to Coffeyville Resources' oil refinery resulted in the hospitalization of several workers. The leak was caused by a failed pump. [STAR: KANSAS OIL SPILL]

JUL-31-07: Some residents in Coffeyville will have to relocate because of the oil spill. Many lost their business, their homes, and their livelihoods because of the damage. [SUN: KANSAS OIL SPILL]

JUL-15-07: Many victims of the Kansas oil spill did not have flood insurance and will rely on government assistance and settlements from the refinery to rebuild their homes. [NEWS LEADER: KANSAS OIL SPILL]

JUL-10-07: Residents of Coffeyville, Kansas are now allowed back into their homes after a flood and oil spill forced them out. Although some homes are safe to move into, many others have been condemned. [KOTV: KANSAS OIL SPILL]

JUL-09-07: Thousands could join a class action lawsuit in the wake of a Kansas oil spill that saw thousands of gallons of crude oil spill through Coffeyville. The suit argues that Coffeyville Resources should have closed off oil lines faster when they learned of the expected flood. [
Stay Informed
Get the latest on class action lawsuits, settlements & more! Subscribe to our free weekly newsletter.
Get our Newsletter!
Submit a New Complaint
Been wronged by a similar product or service?
Click here to send us your complaint.
RELATED NEWS
More News

Posted by
Shaniqua Pittman
on August 21, 2017
My brother moved to Coffeville, KS for college. Less than 2.5 hours after moving into his dorm room his face, eye lids, throat, and tounge swelled up. The emergency room had to give him Benadryl and Predinisone. The swelling continued for days. Less than 1 week later, my parents had to go back to get him. Some explaining is needed from Coffeyville KS!