Home > Class Action News > Lead Testing Should be Available for Everyone

Lead Testing Should be Available for Everyone


Kaaliyah is only three years old, yet she has had to undergo three tests for lead poisoning. The first two were required: the third was recommended by the family doctor because she shows signs of lead poisoning. Diana, her mother, hadn't a clue as to the cause of high levels of lead in her daughter, until she heard about Mattel's recall: Kayla had chewed her Elmo sing-along toy -- one of more than 800,000 Mattel toys recalled due to lead paint.

And the tests are not pleasant, especially for a three-year-old. "Blood is drawn from her vein and she is terrified of needles; this is very traumatic for her," said Diana.

"Kaaliyah has been suffering for a while from constipation and poor appetite," Diana said. "Our doctor explained that she is also anemic; iron would help increase her red blood count but the lead in her body is affecting this process." 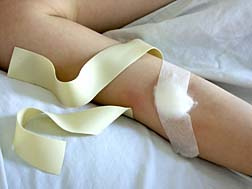 A BLL of 10 or more is cause for concern: tests and examinations by a physician should be repeated ever 3-4 months. If the BLL is above 20, Chelation therapy may be recommended. Kaaliyah is fortunate because her doctor did not recommend this treatment - she didn't want Kaaliyah to begin Chelation until her BLL reached 40. "I am very concerned about Kaaliyah because lead poisoning can mean lifelong damages," said Diana. Those damages can run the gamut, from learning disabilities to severe brain damage to kidney diseases and muscle weakness.

Luckily, Diana's four other children are not at risk. "She was stingy with her toy so none of the other kids played with it," explained Diana. "Kaaliyah loved her Elmo sing-along toy and she chewed on the microphone; I can see little scratches from where she chewed on it."

Kaaliyah also played with Dora the Explorer—and there are a lot of other Mattel toys and Fisher Price toys ( a subdivision of Mattel) in the household. Some of them are on the recall list and some toys are "just suspicious" but they will all be tested. "She was sad when I took away Elmo and Dora but she has a million toys," said Diana. "I think these toys with lead paint might have been around for a long time—long before these recent recalls-- so I have sent other toys to be tested that are not on Mattel's recall list. But most of the toys we have are Mattel and Fisher Price."

Currently, Attorney Jeffrey Killino is having the toys tested at an Ivy League University. "It's too early to have any results because we have so many toys to test," he explained. "Once the machines are set it motion it should be fast - I expect the testing to begin this week and we should see some of the results soon. I have sent hundreds of toys to be tested. And I'm sure—I would hope—that Mattel has their own labs."

Diana wants parents to be aware that they MUST get their kids tested for lead poisoning. Some children may not have any warning signs but lead poisoning might show up at a later date. " It could be in their blood and you wouldn't know it; lead poisoning has subtle affects on a lot of children—it is a neuro-toxin that stays in the brain and bone permanently - once it moves to the bone and brain it never leaves," added Killino.

"it seems that Mattel has violated the 24 reporting CPSC requirements," said Killino, "and the CEO of Mattel essentially told the Wall Street Journal he does not follow CPSC regulations because he disagrees with the law." Jeffrey Killino wants Mattel to step up and do the right thing, not only in its dealings with the CPSC but also with lead testing.


READ MORE LEGAL NEWS
More News
Killino has filed a class action lawsuit requesting that Mattel pay for testing of any children who are at risk of lead poisoning from its toys. The lawsuit wishes to make Mattel responsible for establishing a fund that would pay for children to be tested for lead poisoning. Parents who are concerned about their children's health would then be able to access this fund and get their children immediate treatment if necessary. (Under current U.S. regulations, children's products found to have more than 0.06 per cent lead accessible to users are subject to a recall.)

"If Mattel is really concerned about the safety of children, then it should address the root of the issue," said Killino. "Mattel should determine how many children were affected by these poisoned toys so that they can get immediate treatment."