Mattel Should Pay for Lead Testing


How much lead paint would you let your child play with? None, says attorney Jeffrey Killino. "Parents I have spoken with are so upset," says Killino. "They put their trust and faith in Mattel and they didn't get any deals—if the toys were cheaper [made in China], Mattel kept the profits because the US consumer paid the full price."

Those parents who purchased Mattel's toys with lead paint may be paying even more—this time in lead testing--unless a class action lawsuit filed by Killino is successful.

"If Mattel is really concerned about the safety of children, then it should address the root of the issue," says Killino. "Mattel should determine how many children were affected by these poisoned toys so that they can get immediate treatment." 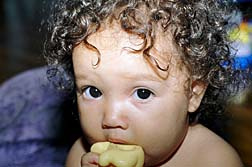 Recently, a Mattel spokeswoman said that some toys containing lead "are only partly covered with the paint". Well, that's a relief if your child only chewed on the unpainted part! And there is one other bit of crucial information that has not been forthcoming from anywhere: what levels of lead have been found in these toys? Doesn't Mattel know the answer?

Every parent Killino has talked with wants their child to be tested for lead poisoning. "They see their child's toy all chewed up and they are worried—who is going to pay for the lead testing?" Killino says that Mattel won't do the right thing.

"If you are at a restaurant and the waiter spills food on your lap, he cleans up as best he can, says sorry, and the restaurant takes care of the dry cleaning bill...of course Mattel is responsible."

Killion believes it isn't the cost of lead testing that Mattel is concerned about. Rather, it is uncovering all the kids who may be poisoned or who have suffered side effects...

Lead is a highly toxic metal that can cause serious health problems. Under current US regulations, children's products with more than 0.6 percent lead accessible to the user are subject to recall.


READ MORE LEGAL NEWS
More News
According to the National Safety Council, " Lead is a highly toxic substance, exposure to which can produce a wide range of adverse health effects. Both adults and children can suffer from the effects of lead poisoning, but childhood lead poisoning is much more frequent. Over the many years since we have known about the hazards of lead, tens of millions of children have suffered its health effects."

In 2004, more than four hundred thousand children under the age of six had too much lead in their blood. Where did the lead come from? It makes you wonder how long companies such as Mattel have sold toys with lead paint...

Lead exposure is especially dangerous for children because they are still growing, and their brains are developing. If lead is ingested, it can cause behavioral problems, learning disabilities, seizures and even death.

A blood test is the only way to determine whether a child has been exposed to lead.