John Caldwell recently discovered that he needs a new roof. He just bought the house four years ago and had no idea the CertainTeed shingles were curled and rotting. And he wasn't prepared to shell out $15,000 for a new roof—even though the shingles are defective, CertainTeed isn't standing behind their product.

"Either the inspector didn't notice the defective shingles when I purchased my house or they just curled and rotted in the last few years," says Caldwell. "There is no way this should happen on a roof that is only 10 years old." Now Caldwell is contemplating holding off on a new roof and joining a [lawsuit] against the company. 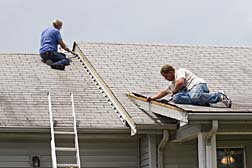 "We had a lot of hail damage last April and I called my insurance company," he says. "They sent out an adjustor and he couldn't find any hail damage but did find the shingles to be defective. That came as a total surprise. I called a roofing contractor and he verified that indeed they were defective. Next, my roofer called a CertainTeed rep (I think CertainTeed only talks to roofers) and he sent a couple of my shingles to the company."

The rep told Caldwell that CertainTeed would give him new shingles to cover the roof (which is more than they have done for other [disgruntled consumers] but they wouldn't cover the cost of removing them or the cost of replacement. They basically admitted the shingles were defective. But why would anyone want to replace the defective shingles with more shingles from the same company?

"I called their main office a few months ago and the customer rep said he doesn't know of any defective shingles that were made by CertainTeed," says Caldwell. " I just laughed! I told him there was a class action lawsuit against the company and a lot of people were getting involved but this guy wouldn't admit to any kind of a problem. Talk about customer service!"


READ MORE LEGAL NEWS
More News
"I considered their offer -- getting the new shingles --and I even have a place to store them but my quote to redo the roof is about $15,000 (which includes labor and other materials) so at this time, I am not willing to put new CertainTeed shingles on the roof and pay this amount. I'd rather hold out and get involved in a lawsuit against this company. They should stand behind their products. Instead they are hiding behind a curtain.

I am willing to negotiate—even pay half the labor cost - but they won't even come to the bargaining table. They are a large company; certainly they have insurance to cover their costs. When I make a mistake in my business, I make it right. I'm a printer and my policy is to make my customers happy. So what's up with CertainTeed? I hope this lawsuit will make something happen."