The week’s top class action lawsuits and settlements. This week’s highlights include Wal-Mart, Budweiser and Apple. 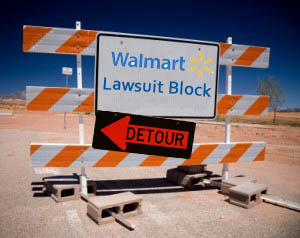 If at first you don’t succeed, try, try, try again…Good advice, we hope, for the women who have just filed a regional gender discrimination class action lawsuit against Wal-Mart.

Now, to be clear, Wal-Mart is not unfamiliar with the allegations, as a national gender discrimination and employment class action was filed against the world’s largest retailer only to be dismissed in 2011 by the US Supreme Court. Had that class action gone through, the class of plaintiffs would likely have been in the hundreds of thousands. But it didn’t. So—now, acting on the advice from the Supreme Court, women are filing discrimination class actions by state. The one filed this week is the fifth such regional lawsuit.

I’ll show my gender bias and wish them every success!

Hey Bud—this one’s for you! Oh heck yes. This week saw Anheuser Busch, the brewer of the self-proclaimed King of Beers—Budweiser —get hit with several consumer fraud class action lawsuits alleging that it waters down its Budweiser, Michelob and other top-selling beers. Tsk,Tsk. Do not go messing with people’s alcohol content gentlemen.

Filed in Pennsylvania, California and other states, the Budweiser lawsuits allege that consumers have been sold beer that contains less alcohol than advertised on the labels.

Specifically, the complaints allege that Anheuser Busch employs some of the most sophisticated process control technology in the world to precisely monitor the alcohol content at the final stages of production, and then adds additional water to produce beers with significantly lower alcohol content than is represented on the product labels, and depriving consumers of the value they paid for.

The lawsuits are based on information provided by former employees at the company’s 13 US breweries, some in high-level plant positions, according to lead lawyer Josh Boxer (MSN.com). “Our information comes from former employees at Anheuser-Busch, who have informed us that as a matter of corporate practice, all of their products mentioned (in the lawsuit) are watered down,” Boxer told MSN.com “It’s a simple cost-saving measure, and it’s very significant.”

The complaint alleges: “There are no impediments—economic, practical or legal—to AB accurately labeling its products to reflect their true alcohol content. Nevertheless, AB uniformly misrepresents and overstates that content.”

Nina Giampaoli who filed the California-based lawsuit, said “I think it’s wrong for huge corporations to lie to their loyal customers—I really feel cheated. No matter what the product is, people should be able to rely on the information companies put on their labels.”

I’ll drink to that!

Nothin’ like a kid in an Apple—er, candy—store. This one is for all you parents out there who woke up on morning to find your credit card balance had magically grown—seemingly on its own. But wait—is that the patter of little feet I hear? Could it be the kids buying in-game extras from the Apple mobile apps store that’s the root of the mystery? You betcha!

And this week, Apple magnanimously agreed to pony up some gift cards, no total value given, by the way, in settlement of the consumer fraud class action it’s facing over what could only be described as unfair business practices.

If the Apple apps settlement is approved, parents would receive $5 iTunes gift cards. Wow—pack up the kids, you’re going on vacation!

Ok—here’s the skinny. The lawsuit is brought by parents who allege their children downloaded free games from the Apple mobile app store and then went on to buy in-game extras—effectively charging the cost of the games to their parents—without their parents’ knowledge. In some cases these charges ran into the hundreds of dollars. Yup.

If approved, Apple would build a website for people who wish to make a claim. As well the tech-giant would send e-mail notifications to some 23 million customers. OK, that ain’t chump change.

According to a report by CNN.com parents whose children incurred larger costs and who want more than $5 gift card, must provide proof that a larger amount was spent by their children during any 45-day period. Those who can show more than $30 in purchases may choose a cash refund instead of an Apple credit. Purchases made until the date of the settlement would be eligible for refunds, CNN.com reported.

Bad Apple! What kind of example does that set?

Ok—See you at the bar and Happy Friday!