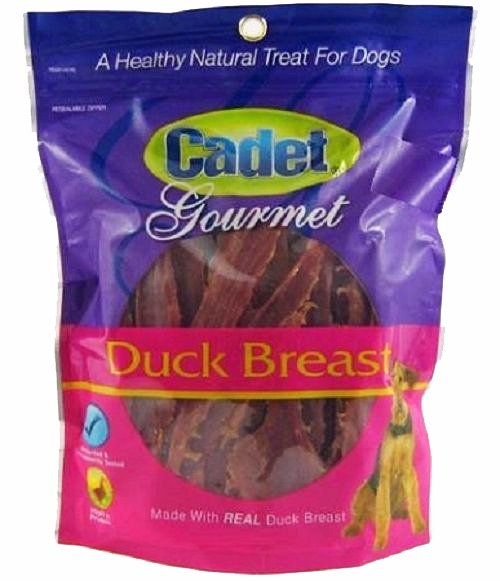 Dog treats manufacturer to be treated to a little justice perhaps? IMS Trading Corp, aka IMS Pet Industries—maker of Cadet duck jerky treats, is facing a consumer fraud class action lawsuit alleging it sold products containing duck jerky imported from China that caused dogs to become sick or die. The dog treat lawsuit alleges the company, IMS Trading Corp, aka IMS Pet Industries, is in violation of the New Jersey Consumer Fraud Act, and is guilty of unjust enrichment as they falsely assured consumers through the product packaging that the treats were healthy for dogs. Several unnamed companies involved in the manufacture and sale of the dog treats are also named as defendants in the lawsuit.

Lead plaintiff, Marie Dopico, who owns several small dogs, alleges her dogs nearly died after she fed them Cadet duck jerky dog treats she bought in October from a ShopRite grocery store in New Jersey. She claims she had to pay veterinary expenses and other related costs to save her dogs’ lives.

The proposed lawsuit claims that there could be thousands of plaintiffs, as other consumers in New Jersey and across the US have suffered similar damages as a result of defendants’ conduct. The putative class and subclass includes consumers who, up to six years prior to the January filing of the lawsuit, purchased IMS dog treats and whose dogs got sick or died as a result of consuming the allegedly unhealthy and dangerous treats.

According to the lawsuit, the packaging for IMS’ dog treats allegedly states the products do not contain artificial colors, additives, fillers or by-products. The packaging also states that the treats are “healthy and natural treats with only the finest ingredients.” The same claims are found on the company’s website, the plaintiffs allege.

The lawsuit states that in November 2011, the US Food and Drug Administration issued warnings stating that dogs can become ill after eating treats containing duck jerky made in China. The agency has said that more than 3,600 dogs in the US have become ill after eating Chinese jerky treats. This information was not fully disclosed on the company’s website, plaintiffs allege, and they accuse the defendants of hiding the warnings to increase or maintain sales.

“No reasonable person would feed dog treats to their dogs knowing that there was a substantial risk of death or illness from doing so,” the lawsuit states. “Dog owners consider their pets to be members of the family, and become very distressed when their dogs pass away or become seriously ill.”

Hilton not honoring wage & hour laws? Maybe. They got hit with a putative wage and hour class action lawsuit this week, alleging violations of the Fair Labor Standards Act (FLSA)  and the California labor law Act. In addition to Hilton Worldwide, named defendants include Doubletree LLC, and Crestline Hotels and Resorts LLC.

Further, the lawsuit states the defendants failed to provide itemized statements for each pay period, failed to keep accurate records and failed to compensate employees for necessary expenditures.

Heads up people—the potential employment class action seeks to represent aggrieved employees who worked for the defendants within the past four years.

Actos maker ordered to pay up huge. Japanese drug maker Takeda Pharmaceutical Co Ltd, got hit with a heart-attack inducing jury award this week—they were ordered to pay $6 billion in punitive damages in settlement of allegations the company concealed information regarding the risk for cancer associated with its diabetes drug Actos. Eli Lilly and Co, a co-defendant in the case, was ordered to pay $3 billion in punitive damages and $1.45 in compensatory damages by the jury in Louisiana on Monday.

According to Lilly, 75 percent of the liability was allocated to Takeda and 25 percent to Lilly. Takeda plans to dispute the awards, stating that judgments were entered in its favor in all three previous Actos trials. This was the first federal case to be tried in a consolidated multidistrict litigation comprising more than 2,900 lawsuits. Germany and France suspended use of the drug in 2011 due to concerns of a possible link to cancer.

More to come on this? Very possibly. Stay tuned.