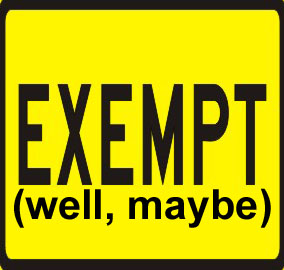 Coulda Used Employee Directory Assistance? Seems the masters of directory assistance could’ve used some help with their own employee directory—or at least with how they classified certain employees. So, they finally called “overtime” on unpaid overtime at AT&T and its subsidiaries BellSouth Telecommunications Co, and Pacific Bell Telephone Co. The telecom giant got hit with a couple of class action lawsuits this week, alleging that they withheld as much as $1 billion in overtime wages from 5,000 plus first level managers who worked for PacBell in the states where BellSouth does business.

Although most of us can likely guess what the charges are, just for the record AT&T allegedly violated the Federal Fair Labor Standards Act (FLSA), as well as California State Laws by deliberately misclassifying thousands (yes, thousands) of level one managers as being exempt from overtime wages. Yeah, that would probably save shareholders a bundle. Other allegations include not paying for meal and rest breaks—how predictable.

So, who’s eligible? There are two classes:

So much for the dog days of summer…it was a busy week.

[Pay]check is not in the mail? It seems every week a major brand is in the news for some alleged type of labor or wages violation. This week it’s UPS. The global courier company is facing a potential class action lawsuit over all

egations that it withheld as much as $100 million in overtime wages from its account managers.

The suit alleges that UPS is in violation of the Federal Fair Labor Standards Act and California’s wage and hour laws. The suit also alleges that UPS does not provide employees with mandatory meal periods and rest breaks and fails to keep adequate records of the hours the employees work. Who said management had it good? I would think that unpaid management overtime is a silent epidemic.

Vanishing home equity? Have you checked your home equity line of credit lately? Maybe you should. Michael Hickman of Illinois did, and got quite a nasty shock. Hickman alleges that he had END_OF_DOCUMENT_TOKEN_TO_BE_REPLACED