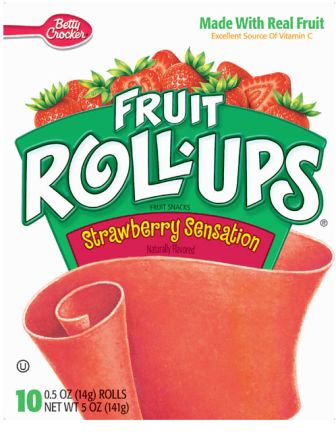 Well, Hello…Something fruity is going on here—or not as the case may be… A proposed consumer fraud class action lawsuit has been filed against General Mills alleging the company misled consumers about the nutritional and health qualities of its fruit snacks, specifically Fruit Roll Ups, Fruit by the Foot, Fruit Gushers, as well as other similar products.

The lawsuit claims that between October 15, 2005 to the present (the “class period”) General Mills engaged in a widespread marketing campaign to mislead consumers about the nutritional and health qualities of its Fruit Snacks. Specifically, the suit states, “Defendant made misleading statements that its Products were nutritious, healthful to consume, and better than similar fruit snacks.”

The suit further states “In fact, Defendant’s Fruit Snacks contained trans fat, added sugars, and artificial food dyes; lacked significant amounts of real, natural fruit; and had no dietary fiber. Thus, although the Products were marketed as being healthful and nutritious for children and adults alike, selling these Fruit Snacks was little better than giving candy to children.” Umm…Maybe suitable for Halloween treats?

Did your internal capacitor prematurely fail? No—I mean the one in your TV! On October 3, 2011, preliminary approval was granted to a proposed defective product class action settlement with Philips Electronics North America Corporation (“Philips”).

The settlement proposes to resolve lawsuits that allege certain Philips and Magnavox televisions suffer from a defect that causes internal components (called capacitors) to prematurely fail, resulting in the televisions becoming inoperable. The proposed settlement would entitle qualifying settlement class members, who purchased new or received as a gift new one of the Philips or Magnavox plasma televisions with the model numbers listed below, to monetary benefits or vouchers.

The model numbers of the Philips and Magnavox plasma televisions included in the proposed class action settlement are:

In addition, only those television sets with a serial number reflecting a manufacturing date between November 1, 2005 through December 31, 2006 qualify for participation in this settlement.

The Court has scheduled a hearing in December to determine whether to grant final approval to the settlement.

To be eligible to receive the benefits made available pursuant to this settlement, class members must submit to the claims administrator a claim form that is postmarked by February 28, 2012.

To obtain additional information about the settlement, to determine whether your television qualifies, or to obtain a claim form, you can visit the settlement website at PhilipsPlasmaTVsettlement.com. You can also contact the settlement administrator by calling (855) 477-4407, or by writing to Philips Plasma TV Settlement, c/o Dahl, Inc., P.O. Box 2061, Faribault, MN 55021.

Service gratuity not quite included? This one’s for anyone who ever worked in the service industry and had their tips withheld—and I’m sure there’s no shortage of you out there… A $7 million settlement has been reached by current and past employees of the Cranwell Resort, Spa, & Golf Club in Lenox, ending an employee class-action lawsuit that alleged the resort’s management illegally withheld the workers tips.

If the settlement receives final court approval, approximately 700 food, beverage, and spa employees who worked at the upmarket Berkshire resort between 2001 and 2011 will share in the money. A final settlement hearing is scheduled for November 2011. This is the second of two lawsuits, filed over four years ago, claimed that the employees were not paid the full service charges that were added to hotel bills, which is against state law.

Ok—That’s it for this week. See you at the bar—where I will be repairing my personal, internal capacitor.