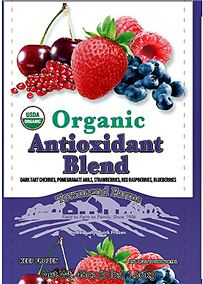 Going Organic Leads to Going to Hospital? Heads-up anyone who bought Townsend Farms Organic Anti-Oxidant Blend frozen berry and pomegranate seed mix: A woman who alleges she fell ill with a hepatitis A infection and was hospitalized after eating this product has filed a lawsuit against Oregon-based Townsend Farms.

According to the food poisoning lawsuit, plaintiff Karen Echard purchased and consumed Townsend Farms Organic Anti-Oxidant Blend in the Phoenix area in April of 2013. Attorneys allege that she fell ill with symptoms of hepatitis A infection, including fever, chills, nausea, abdominal pains and jaundice during an illness that started on May 21.

The Organic Frozen Berry Seed Mix class action states that Karen sought medical treatment for her illness on more than one occasion and was hospitalized for 5 days. Her attorneys allege that Karen, a healthcare practitioner and student, fears she will lose her job and be forced to discontinue her schoolwork due to her illness, as she continues to experience the effects of her hepatitis A infection. The Townsend Farms lawsuit asks for damages including physical injury, medical and medical-related expenses, wage and lost earning capacity damages.

On June 6, the Centers for Disease Control and Prevention announced that at least 61 people from 7 states had fallen ill with hepatitis A infections in a “Multistate outbreak of Hepatitis A infections potentially associated with ‘Townsend Farms Organic Anti-Oxidant Blend’ frozen berry and pomegranate mix.”

Lipitor Diabetes Link Looking at Lawsuit. Lipitor is making news—this time it all about what the anti-cholesterol drug shouldn’t be doing—allegedly. Pfizer, the maker of Lipitor (atorvastatin) is facing a mounting number of these personal injury lawsuits, alleging the drug causes diabetes. In fact, several of the initial Lipitor diabetes lawsuits have just been green lit for a Multi-district litigation—or MDL.

The Lipitor lawsuits allege that Pfizer has failed to adequately warn consumers of the risk for developing diabetes associated with the statin. In 2012 Pfizer updated the Lipitor labeling to include warnings of increased risk for diabetes, however, the lawsuits contend that this was insufficient.

Lipitor belongs to a class of drugs called statins, which are used to lower cholesterol by reducing blood levels of low-density lipoprotein (LDL) cholesterol, or “bad” cholesterol, a contributing factor in heart disease. A study (Culver AL, Ockene IS, Balasubramanian R, et al. “Statin Use and Risk of Diabetes Mellitus in Postmenopausal Women in the Women’s Health Initiative.” Archives of Internal Medicine, 2012,172(2): pp.144-152.), completed in 2012, as part of the Women’s Health Initiative (WHI) found an association between the statin class of medications and the development of type 2 diabetes in women, particularly post-menopausal women.

Among the most recent Lipitor diabetes lawsuits filed is that of Margaret Clark, filed in the US District of South Carolina, this April. She contends she was prescribed Lipitor in 2002 to address her risk for heart disease. At the time, according to her lawsuit, she was considered a healthy weight. However, in February 2012, Clark was diagnosed with type 2 diabetes.

Clark’s lawsuit alleges Pfizer knew or should have known that there was a connection between Lipitor and diabetes before it was made publically available in 1997. Instead, the warning was only added to the product labeling in February 2012, after the FDA’s Division of Metabolism and Endocrinology Products requested that a warning be provided for consumers and the medical community.

According to the lawsuit, the warning did not actually mention type 2 diabetes, but rather stated “Increases in HbA1c and fasting serum glucose levels have been reported with HMG-CoA reductase inhibitors, including LIPITOR.”

The Lipitor lawsuit also states “Until the February 2012 label change, Lipitor’s label never warned patients of any potential relation between changes in blood sugar levels and taking Lipitor.” And, “Despite the February 2012 label change, Lipitor’s label continues to fail to warn consumers of the serious risk of developing type 2 diabetes per se when using Lipitor.”

The tentative Crest toothpaste settlement, if approved, could include anyone in the US who purchased Crest Sensitivity Treatment & Protection toothpaste between February 2011 and March 2013. If you purchased this toothpaste between those dates, you may be eligible to claim a full or partial refund from the settlement. If approved, potential class members must submit a valid claim form and proof of purchase in order to receive damages. Class members with with proof of purchase will be able to claim a full refund of the purchase price they paid. Those without documentation will receive a refund of $4. Only one tube of Crest Sensitivity toothpaste will be refunded.

Valid claim forms and any supporting documents must be postmarked no later than August 19, 2013. Detailed claims filing instructions are provided below.

A Final Fairness Hearing will be held on September 12, 2013.

For complete details on filing a claim, and to download forms, visit: http://www.sensitivitytoothpastesettlement.com

Okee dokee—that’s it for this week—happy and safe weekend to you all—see you at the bar!