Filed in the US District Court for the Northern District of California, these women seek to end pervasive gender discrimination in their workplace on behalf of themselves and a class of several hundred female Daiichi Sankyo sales professionals who have worked for the company in the United States.

According to the Daiichi Sankyo lawsuit, a discrete group of predominantly male Daiichi executives and senior sales managers keep a tight rein on employment decisions, including decisions regarding sales employees’ compensation, advancement, and other terms and conditions of employment. Through this male dominated leadership structure, the Company has approved and implemented policies, practices and decisions that have systemically discriminated against female employees. No, this is not a Mad Men script. This, sadly, is real life.

Just in case there are any doubts as the validity of the allegations, the Plaintiffs cite Daiichi Sankyo’s violations of Title VII of the Civil Rights Act of 1964 and the federal Equal Pay Act of 1963, as well as the California Fair Employment and Housing Act, the California Equal Pay Act and the California Unfair Business Practices Act in today’s Complaint. Umm… 1963—1964 the laws changed and yet we’re still fighting for gender equality in 2013. No comment.

Major Motrin Award. A landmark award this week—but brace yourself for the backstory. Boston, MA was the scene of a personal injury lawsuit against Johnson & Johnson (J&J) and its subsidiary, McNeil-PPC Inc, that ended this week with the jury awarding $63 million in damages to the Reckis family who brought the lawsuit involving Motrin.

The two pharmaceutical companies were ordered to pay 16-year old Samantha Reckis $50 million in compensatory damages, and her parents $6.5 million each.

What happened? Samantha suffered toxic epidermal necrolysis (TEN), a late stage of Stevens Johnson Syndrome (SJS), as a result of taking Motrin brand ibuprofen. Just seven-years old at the time, Samantha was given Motrin brand ibuprofen by her parents, and shortly thereafter began presenting with symptoms of TEN, which resulted in her losing 90 percent of her skin and her eyesight.

Samantha also suffered brain damage involving her short-term memory, and surgeons had to drill through her skull to relieve some pressure on the brain, the Reckis’ attorney noted. Additionally, Samantha suffered damage to her respiratory system, in which her lungs were burnt, leaving her with only 20 percent lung capacity.

Samantha had taken Motrin previously with no side effects. However, in 2003, the day after Thanksgiving, her parents began giving her the medication to reduce fever. The resulting toxic epidermal necrolysis, which can be fatal, causing inflammation of the mucus membranes and eyes and is marked by a rash that burns off the outer layer of skin, had her physicians puzzled. Samantha suffered inflammation of her throat, mouth, eyes, esophagus, intestinal tract, respiratory system and reproductive system. Her doctors were forced to put her in a medically induced coma.

The family filed the lawsuit in 2007. The trial took five weeks. The Reckis’ claimed that Samantha was blinded by Motrin and alleged that Johnson & Johnson failed to warn consumers that the drug could cause life-threatening reactions. Another positive, in addition to the award, is that while Samantha has to work twice as hard as her fellow classmates, she is in school and is an honor student, demonstrating a remarkable spirit.

The two class actions stem from claims that Merck and Schering (which merged in November 2009) artificially inflated their securities by concealing material information and making false and misleading statements regarding the blockbuster anti-cholesterol drugs Zetia and Vytorin.

Namely, the lead plaintiffs alleged that even though the Defendants knew that a clinical trial of Vytorin, called “ENHANCE,” demonstrated that Vytorin (a combination of Zetia and a generic statin medication) was no more effective than the cheaper, generic statin drug at reducing artery thickness, the Companies nonetheless championed the “benefits” of the drugs, attracting billions of dollars of capital in the process. Yielding to public pressure to release the results of the ENHANCE trial, Lead Plaintiffs allege that the companies reluctantly announced that the cholesterol drugs showed “no statistically significant difference” in plaque buildup, and that news of these negative results and their related consequences caused sharp declines in the value of the companies’ securities, resulting in significant losses to investors.

So—the moral of the story? You tell a Whoppa, you pay a Whoppa—quid pro quo baby!

See you at the bar—I know who’s buying… 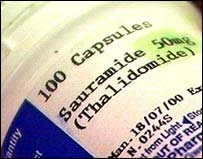 Could this mean resolution for thalidomide victims?…New research suggests that thalidomide—a drug that caused thousands of horrific cases of deformities in children—caused far more deformities in the U.S. than were reported during the height of the pharmaceutical crisis of the early 1960s.

Invented by German drug company Grunenthal, thalidomide was widely used throughout Europe during the late 1950s and early 1960s, resulting in thousands of deaths and extreme, disfiguring birth defects when used by women during pregnancy. The drug was never approved in the United States, but the new lawsuit filed late October 2011 alleges that as many as 2.5 million doses of the drug were distributed by more than 1,200 doctors to more than 20,000 people, including pregnant women.

Newly discovered and translated documents reveal that Smith, Kline and French (SKF), now owned by GlaxoSmithKline (GSK)conducted a trial of the drug in 1956 and 1957, but buried the evidence, allegedly resulting in a missed opportunity to save thousands of lives.

Instead, according to the filed lawsuit, brought on behalf of 13 men and women with severe birth defects, SKF concealed the results of its trial from the public, allowing another company, Richardson-Merrell, now owned by Sanofi-Aventis to move ahead with large-scale “clinical trials” that involved more than 20,000 people, including pregnant women.

The lawsuit also claims that conclusions made in the early 1960s about the types of birth defects caused by the thalidomide were incorrect.

According to legal counsel, researchers concluded that thalidomide causes bilateral birth defects, such as two missing or shortened arms or hearing loss in both ears. As a result, babies born with unilateral defects, such as one deformed limb, or hearing loss in only one ear were not deemed thalidomide victims, even when their mothers were given the drug while pregnant.

However, new research involving thalidomide as part of a treatment regimen in cancer patients show that many of the assumptions used in the 1960s are incorrect. The thalidomide lawsuit alleges that this new understanding of the drug means that many individuals who experienced unilateral defects may have been misdiagnosed when their doctors told them thalidomide could not have been the cause.

“Among other things we intend to show in court that thalidomide does not work through a neural mechanism as previously thought, but affects the vascular system,” a lawyer for the plaintiffs said.

The complaint claims that the defendants are either guilty of or liable for a civil conspiracy, failing to report and covering up evidence that thalidomide was harmful, especially when taken during the early stages of pregnancy. The lawsuit also says that the defendants were negligent in continuing to manufacture, test and distribute the drug.

Motrin SJS Verdict. This is one for the books. Let’s hope it makes a difference. On October 3, 2011, a Los Angeles jury returned a record-setting verdict against Johnson & Johnson and their fully owned subsidiary McNeil Consumer Healthcare for $48.2 million—with pre-interest and cost of judgment it’s expected to reach $60 million. The lawsuit alleged that Motrin caused SJS/TENS or Stevens Johnson Syndrome (SJS), also known as Erythema Multiforme, Leyll’s Syndrome, and in its later stages, Toxic Epidermal Necrolysis (TEN). SJS/TEN is a serious and potentially life-threatening disease that causes large areas of the skin to become detached and lesions to develop in the mucous membranes.

The verdict was based on findings of malice towards the consumers of the over-the-counter drug Motrin, specifically for not putting a warning label on the product that could have spared Trejo’s and others’ health. This is believed to be the first verdict of its kind involving punitive damages associated with this over-the-counter temporary pain reliever.

At age 16, Christopher Trejo, who is now 22 years old, took some Motrin as directed on the label for less than one week, but contracted TEN. It caused a severe inside-out exfoliating reaction affecting all of his mucosal membranes, which is equivalent to second- and third-degree burns over 100% of his body. The TEN reaction also caused severe pulmonary damage, near-blindness, infertility, whole-body scarring and a hypoxic brain injury. Trejo’s abilities to see, hear, smell, taste and touch have been severely diminished.

After hearing the evidence, the jury found that the labeling on Motrin was inadequate and should have been changed years earlier to properly educate and alert consumers to the developing signs of severe reactions, which include skin reddening, rash and blisters. Early detection and treatment of these symptoms can prevent TEN or SJS.

Apple Playing the Same Old tune? Apple, Inc., has agreed to settle a consumer fraud class action lawsuit that could amount to over $50 million dollars in payouts—but before you get all excited know this “Apple has agreed to provide an iTunes® Store credit in the amount of $3.25 to all settlement class members who qualify and submit a valid claim form. ” That’s the skinny.

The lawsuit claimed that Apple advertised and sold gift cards which stated that if one purchased and used the gift card, all songs purchased at Apple’s online iTunes® Store would cost 99¢ per song. The lawsuit further claimed that in April, 2009, Apple raised the price of certain songs at the iTunes® store, yet refused to honor the promised 99¢ price when the gift cards were redeemed. In addition, the company continued to sell iTunes® gift cards with the phrase, “Songs are 99¢” printed on them.

Consumers who were overcharged for iTunes songs while using iTunes® 99¢ gift cards are now eligible to receive an iTunes® Store credit in the amount of $3.25 after completing the simple iTunes® class action lawsuit online claim form. Millions of e-mails are currently being sent to persons who may have used affected gift cards to purchase songs from the iTunes® Store.

You can find out how to make an Apple iTunes lawsuit claim here.

Ok—That’s enough for this week. See you at the bar—don’t forget your iPod.