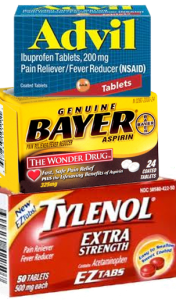 What’s in an Expiration Date? According to three separate consumer fraud class action lawsuits filed this week, a whole lot of questionable motivation.

Filed against Pfizer (which makes Advil), Bayer (which makes Bayer aspirin) and Johnson & Johnson (which makes Tylenol Cold Multi-Symptom medications), the drug expiration date lawsuits allege the drug makers use “unconscionable, unfair, deceptive, unethical and illegal” means to promote the sales of their products. Specifically, the lawsuits claim that the these means involve the utilization of expiration dates to get consumers to throw away products that have passed their expiration dates, even though the companies know “that if stored properly these medications can and do remain chemically stable, safe and effective long after those dates.”

According to the consumer fraud lawsuits, studies by the Food and Drug Administration, Harvard Medical School, and Johns Hopkins University have found 90% of more than 100 prescription and over-the-counter drugs were fine and could be used for as much as 15 years after their expiration dates: this excludes certain drugs like tetracycline, nitroglycerin, insulin, and liquid antibiotics.

The lawsuit claims that the purpose of the expiration dates is “[T]o increase defendants’ sales and profits because consumers have to purchase replacement medications for those they have thrown out.” The class is seeking actual and punitive damages for consumers that purchased products from Pfizer, Bayer and Johnson & Johnson.

And Speaking of Drug Marketing… A $15 million settlement has been reached in the consumer fraud class action against Bayer regarding allegations of false advertising around certain combination aspirin products that were sold without FDA approval.

If you purchased Bayer® Women’s Low Dose Aspirin + Calcium or Bayer® Aspirin with Heart Advantage, you may be a member of the Bayer Heart Advantage Class or the Bayer Women’s Class (collectively referred to as the “Settlement Classes”) – and thus eligible to receive money from the settlement – depending on (1) which Combination Aspirin Product you purchased, (2) whether you purchased it for personal, family or household uses, and (3) when it was purchased. Each Settlement Class only includes purchases of specific Combination Aspirin Products during specific periods of time.

If you purchased one or more of the Combination Aspirin Products for personal, family or household uses then you are eligible to participate in one or both of the Settlement Classes described in this Notice, provided that your purchase occurred during the time periods specified for each Settlement Class.

To learn more about making a claim and to download forms go to the Bayer Combination Aspirin Class Action Lawsuit Settlement at BayerCombinationAspirinSettlement.com.

Convenience Food not so Convenient… A proposed settlement has been reached in a discrimination class action lawsuit pending against Burger King. The lawsuit, brought by individuals who use wheelchairs and scooters for mobility, allege that they encountered access problems at certain California Burger King leased restaurants.

Specifically, the Burger King class action lawsuit alleges individuals who use wheelchairs and scooters for mobility have been subjected to discrimination at the restaurants that allegedly contain unlawful architectural barriers to access. The Burger King ADA lawsuit sought to remove the alleged barriers, and monetary damages for Class Members denied access to restaurants on or after October 16, 2006.

The proposed settlement terms includes a total of $19 million for monetary relief, which will provide an estimated average recovery per class member of over $8,200, after deductions for attorney’s fees and costs.

Burger King Corporation and the restaurant operators deny they did anything wrong. The parties have reached a settlement of this case. It is now up to the Court approve the proposed settlement.