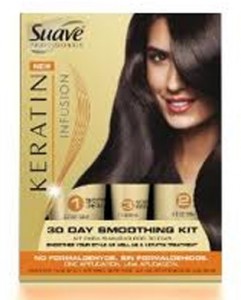 Will Sauve/Unilever Smooth their Way out of This? Unilever, the parent company of Suave, got hit with a defective product class action lawsuit this week over allegations its now defunct Suave Professionals Keratin Infusion 30-Day Smoothing Kit actually ruins your hair. I guess you can’t smooth what you don’t have!

The Suave class action lawsuit was filed by 14 women who all allege they suffered permanent hair damage as a result of using the product. Tonja Millet, one of the plaintiffs in the class action lawsuit, claims the product melted her hair, made it sticky and impossible to comb. Now, that doesn’t really jive with the product advertising, which one Suave Professionals Keratin Infusion 30-Day Smoothing Kit commercial reportedly claimed “…transforms frizzy, unmanageable hair into hair that’s sleeker and easier to style.”

After using the product, Millet said it kinked her hair instead of straightening it. When she called the product’s consumer hotline to complain, she was told that she had likely used the Suave Professionals Keratin Infusion 30-Day Smoothing Kit incorrectly. (Ummm. Should it be on the market in that case?) When she went to her salon a few days later, Millet’s stylist told her that her hair had been chemically melted. As a result, Millet had 10 inches cut off her hair. Talk about a “bad hair day.”

Unilever pulled the Suave Professionals Keratin Infusion 30-Day Smoothing Kit from stores after receiving a greater than expected number of complaints. (What was the expected number?) The kit has since been discontinued. But apparently the story ain’t over.

Were you “Discovered?” Did you buy into what you thought were free credit card services promoted by Discover Bank between December 1, 2007 and August 31, 2011? If so, you may be interested to learn that the bank has agreed to pay $200 million to settle consumer fraud allegations brought by federal investigators concerning credit card add-ons that consumers were led to believe were free.

After a one year investigation into the telemarketing and sales tactics used by Discover agents, federal investigators found that consumers were misled credit (otherwise known as consumer fraud) into paying for credit card services including credit score tracking, payment protection, identity theft protection and wallet protection.

The $200 million Discover credit card settlement is in addition to a class action lawsuit settlement of $10.5 million agreed last year by Discover, and a $2 million settlement agreed this year with the Minnesota Attorney General, both of which alleged deceptive marketing practices.

Eligibility for refund would include customers who were charged for one or more of these products between December 1, 2007 and August 31, 2011, and based on the products they purchased and how long they held them. Customers will reportedly be notified directly by Discover Bank.

Additionally, all consumers will receive at least 90 days’ worth of fees paid, minus any refunds they have already received. As many as two million customers will receive full refunds of all of the fees they paid.

In addition to the $200 million refund to consumers, Discover will pay a $14 million civil penalty.

To find out more about the settlement, visit the Discover Card Product Settlement at consumerfinance.gov/pressreleases/discover-consent-order/

Boffo BoFA Settlement.  And the big story this week—Bank of America Corp (BoFA) has reached a preliminary settlement in a securities class action lawsuit, which will see BoFA shelling out $2.43 billion to end claims it was not forthcoming with financial information about Merrill Lynch & Co to the banks shareholders, prior to BoFA buying the securities house. (Just what does compel banks to tell the truth—or does that responsibility fall solely to the people who bring lawsuits against them? I digress.)

The BoFA settlement backstory, short version: BoFA agreed to buy Merrill Lynch in 2008, at the height of the financial crisis, however it tried to scrap the deal just weeks after signing but was unsuccessful. Merrill Lynch generated more than US$15 billion of losses and its executives agreed to award employees up to US$5.8 billion of bonuses, according to a report by Reuters.

In December 2008, BoFA’s shareholders approved the Merrill Lynch deal, but once the merger was complete, there was a dramatic drop in BoFA share value, and investors subsequently sued, alleging Merrill’s losses and bonuses should have been disclosed before the vote.