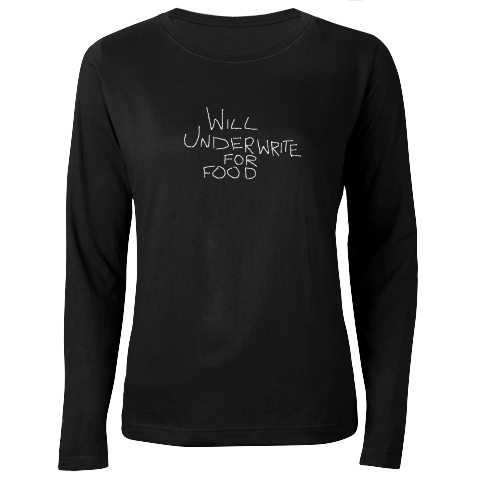 Good thing as you won’t be getting overtime. (Shirt available at CafePress.com)

Underwriters Underpaid. JP Morgan Chase got hit with an unpaid overtime class action lawsuit earlier this week. Seems to be a pretty common practice these days.

But it’s not like Chase can’t afford the overtime—especially when you consider that their loan underwriters are pivotal in bringing in the big bucks. Chase is one of the country’s largest commercial banks, and “performs a significant amount of real estate loan origination and underwriting.” In order to do that business, Chase employs roughly 500-1,000 underwriters nationwide, many of whom allege they worked nights and weekends to get the job done.

$15M Plane Crash Settlement. Several months ago small plane crash killed 37-year old Michael Waugh, a restaurant executive who was returning to Chicago, along with three other people, after a business meeting. The plane was flown by one Mark Turek, a senior financial advisor for Morgan Stanley and a licensed pilot. Waugh’s family sued Turek’s estate and Morgan Stanely, claiming that hey—maybe they should not have been flying a small plane piloted by a non-professional pilot—but used the same services the rest of us rely on—commercial airlines…Having said that you won’t get me into a small plane even when it’s owned and operated by a commercial airline—I’d rather walk.

Anyway, the court obviously agreed with Waugh’s family and has awarded them $15 million in settlement of their lawsuit.

Finally Something Welcome from Accutane: A Settlement. And another happy ending—well sort of. One of the longest running Accutane lawsuits has reached a settlement with two—but not all—of the defendants. Hoffman La Roche, and Roche Laboratories have negotiated a settlement in a seven year lawsuit brought by a man who alleged he developed Accutane related inflammatory bowel disease (IBD) as a result of taking the acne medicine. The terms of the settlement are confidential.

But Jason Peipert—the rather long-suffering victim in all of this—is also suing his doctor for medical malpractice alleging that the physician was negligent in prescribing the drug in the first place—Accutane was eventually taken off the market.