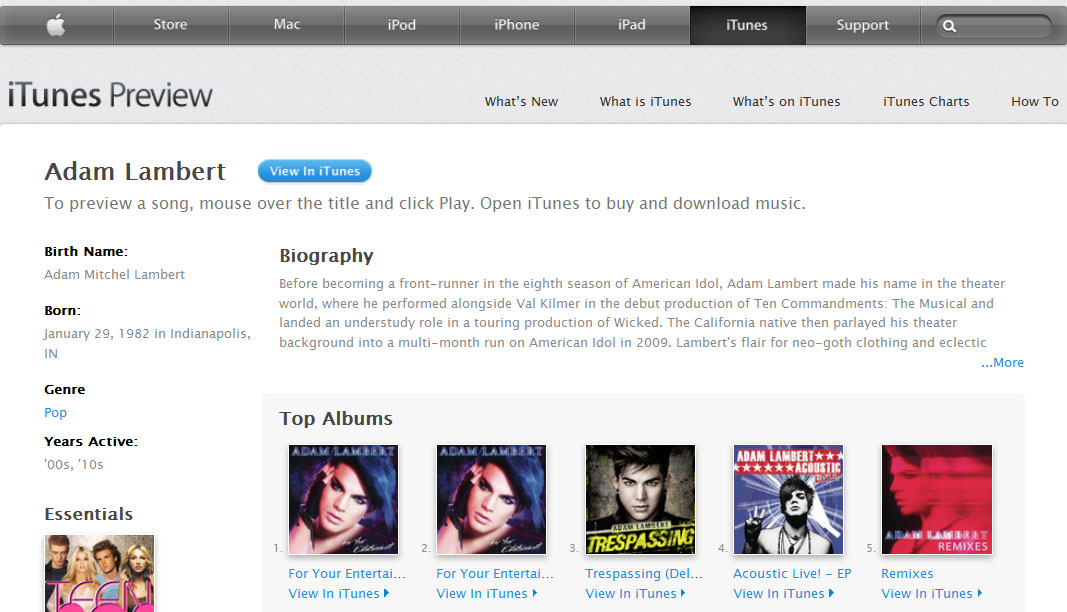 “Whataya Want from Me”—how about a refund! Is Apple taking a bite out of you? Robert Herskowitz thinks they might be. He filed a federal consumer fraud class action lawsuit against Apple this week, alleging iTunes double bills for purchases from its e-Stores and refuses to issue refunds to customers who are affected. Nice.

In his iTunes lawsuit, Herskowitz claims he bought a single song from the iTunes store for $1.29, for which Apple charged him twice. According to the lawsuit, when he brought the error to Apple’s attention, he says, the company responded: “Your request for ‘Whataya Want from Me’ was carefully considered; however, according to the iTunes Store Terms of Sale, all purchases made on the iTunes store are ineligible for refund. This policy matches Apple’s refund policies and provides protection for copyrighted materials.”

The complaint adds: “Under the agreement, as with any consumer transaction, Apple may bill customers only once for each product or service that is purchased. With troubling regularity, however, Apple has ‘double billed’ customers for purchases made through the Apple Stores. In those cases, when a customer purchases a song, movie or book, Apple bills that customer twice for the same download. Apple, however, has effectuated a policy and practice of refusing to refund the extra charge to customers whom it has overbilled.” Therefore, the lawsuit alleges, Apple violates its own terms of agreement as well as California state and common laws.

Furthermore, Herskowitz claims that Apple follows the same illegal policy at its App store, iBookstore and he Mac App store. Herskowitz is seeking damages of more than $5 million for a national class.

Thank goodness for people who check their bills and read the fine print!

“Highly Reprehensible” indeed. And it’s about time somebody came out and said it. This week, a California Appeals Court judge ruled that a $4.5 million punitive damages award in an asbestos mesothelioma lawsuit will be allowed to stand—that it is not excessive, and that the conduct of ArvinMeritor, the defendant in the asbestos lawsuit, and successor of brake shoe manufacturer Rockwell, was “highly reprehensible.”

“By the 1960s, ArvinMeritor knew that workers exposed to asbestos dust were at risk of developing asbestos-related diseases,” the judge wrote. “Indeed, in 1973 and again in 1975, it wrote letters to (Pneumo Abex) and other manufacturers complaining about the presence of asbestos dust in the brake linings it was receiving from them. Nonetheless, ArvinMeritor did not place any warnings on its products until the early 1980s, and continued to market asbestos-containing brakes until its inventory of them was exhausted sometime in the early 1990s.”

The justice noted that ArvinMeritor did not include a specific reference to cancer on its products until 1987. Gordon Bankhead, who filed the ArvinMeritor asbestos lawsuit, had worked at automotive maintenance facilities from 1965-1999. He died of mesothelioma in 2009.

A jury found ArvinMeritor 15 percent at fault for Bankhead’s death and suffering, putting it on the hook for $375,000 of a $2.5 million noneconomic damages award. The company was joint and severally liable for all of the $1.47 million in compensatory damages. A separate trial resulted in the $4.5 million punitive damages award.

Bayer AG, the manufacturer of Yaz/Yasmin birth control pills, has announced that it has settled 651 US Yasmin blood clot lawsuits for a total, so far, of $142 million. This makes the average settlement about $218,000 a case.

According to Bloomberg News, on April 10, the US Food and Drug Administration (FDA) ordered Bayer and other makers of birth control pills to strengthen blood-clot warnings on their products. Consequently, oral contraceptives that contain a synthetic hormone called drospirenone will have warnings on the labels stating that research shows there may be triple the risk for clots with pills such as Yasmin/Yaz. These warnings are also based on an FDA examination of data on more than 835,000 women who took oral contraceptives containing drospirenone, including Yasmin/Yaz.

And on that note—it’s time to adjourn. Happy Friday everyone…