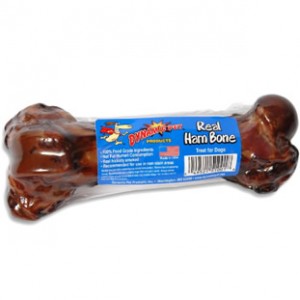 Dogs: Don’t Chew on This… Allegedly defective dog bone chew toys are killing and injuring dogs? That seems to be the sum of a consumer fraud class action lawsuit filed against Dynamic Pet Productions and its parent company, Frick’s Meat Products. The dog bone chew class action was filed by a dog owner who alleges her basset hound suffered fatal injuries after it swallowed a piece of a splintered dog bone chew toy made by the defendant.

In the putative class action, Khristie Reed alleges that she and thousands of other dog owners watched their pets suffer, and in some cases die, after splinters from Dynamic’s “Real Ham Bone For Dogs” injured their pets, despite the company’s claims that the bone is a safe chew toy for dogs.

“The Real Ham Bone For Dogs is not appropriate for dogs and is not safe for its intended purpose, despite defendants’ contrary representations,” the complaint states. “Thousands of dogs have suffered a terrible array of illnesses, including stomach, intestinal and rectal bleeding, vomiting, diarrhea, constipation and seizures, and have died gruesome, bloody deaths as a result of chewing [Dynamic’s] Real Ham Bone For Dogs.”

Since Dynamic began selling the dog bones in 2001, thousands of customers have purchased them through stores such as Wal-Mart, Sam’s Club and Dollar General, according to the complaint. Frick’ Meat Products, the parent company, created the products Dynamic as a way to market waste from its meat products.

The lawsuit states that in 2010, the US Food and Drug Administration issued a statement warning dog owners that splinters from dog bones could result in injury or even death. Further to that warning, and in response to public outcry, the Missouri Better Business Bureau alerted Dynamic and Frick’s to the dangers of their product. However, Frick’s and Dynamic continued to market the dog bone chew toys without providing a safety warning.

Reed contends, in the complaint, that Dynamic was aware of the dangers associated with the dog bone as early as 2006, following consumer complaints to the company about pet injuries and deaths. Pet owners also began posting complaints about the bone to online forums, claiming the bone splintered easily, the lawsuit states.

“Nowhere do [the two companies] state the truth that the Real Ham Bone For Dogs is a dangerous product that should not be given to dogs,” the suit states.

The complaint goes on to state that Frick and Dynamic’s continued marketing of the bone is a violation of the Consumers Legal Remedies Act and the Business and Professions Code, as it misrepresents the product as a safe one. Reed and other owners also allege that the company committed fraud, as it had a duty to alert consumers to the dangers of the product and did not do so. Finally, Reed alleges that Dynamic and Frick’s had a “secret warranty program, paying off pet owners who persistently complained about their products to “keep them quiet.”

The lawsuit seeks damages, including punitive damages, attorneys’ fees, an injunction preventing the companies from continuing any unlawful practices, and the awarding of the profits the two companies made from unethical practices to the plaintiffs involved.

The case is Khristie Reed, on behalf of herself and all others similarly situated v. Dynamic Pet Products and Frick’s Meat Products Inc., case number 3:15-cv-00987 in the U.S. District Court for the Southern District of California.

Is Uber a Bad Deal for Drivers? An employment class action lawsuit was filed against Uber this week by a former driver who was stabbed in the face by a passenger, and who claims that he and others similarly situated, are misclassified by the company as being independent contractors, when they are employees, in violation of California labor law.

Why? In the Uber lawsuit, Abdo Ghazi, claims that he is owed worker’s compensation by Uber, which he would automatically receive if he were classified as an employee.

According to the complaint, “As a consequence of misclassifying its drivers, Uber illegally lowered its cost of doing business by fialing to secure payment of workers’ compensation insurance covering its drivers pursuant to California Labor Code 3700. Uber’s misclassification of drivers as independent contractors gave it an unfair advantage over competing transportation companies, harmed Uber’s drivers and violated California law.”

The lawsuit seeks to reclassify Uber drivers as employees. Anyone who is an Uber driver, or who has worked in that capacity, is included as a plaintiff in the suit.

Ever had a Wire Transfer go Sideways and the Funds Disappear? Then this settlement may interest you. Western Union looks set to pony up $133 million in settlement of an unfair business practices class action lawsuit that claims the company kept money from failed wire transfers for five years, even though they had the contact information for the senders. Where do you start…

Under the terms of the Western Union settlement, class members will recover interest for the time during which Western Union held these funds, something they would not have received simply by asking Western Union to return their money, court documents show.

Additionally, the settlement terms stipulate that Western Union must change its business practices such that it informs customers when their wire transfers fail.

The suit resulted from Western Union’s practice of keeping money from failed transfers and earning interest, electing not to inform customers until their money was due to be absorbed by states’ unclaimed and abandoned property departments.

According to the lawsuit, the period of time Western Union waited to inform customers of the failed transfers often meant that the contact information for those customers was no longer valid.