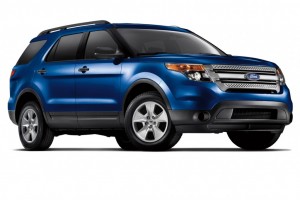 Ford is not in the driver’s seat on this one…They got hit with a defective design class action this week, alleging certain Ford Explorer, Ford Edge and Lincoln MKX models allow carbon monoxide to enter the passenger compartment. Yeah, not so good guys. The suit covers 2011-2015 Ford Explorers as well as Edge and MKX models from 2011-2013 with 3.5L and 3.7L TIVCT engines.

The proposed Ford class action was filed on behalf of New Jersey owners or lessors of the vehicles in question. The complaint also proposes a subclass of consumers with claims under New Jersey’s Lemon Law for claimants who reported the defect to Ford in the first two years or 24 months of ownership.

According to the legal documents, Ford has known of the defect since 2012 but has not warned owners to get it fixed. Surprised? Apparently Ford has issued two technical safety bulletins to dealers about the problem but to date, has not notified owners, despite the related safety hazard. Ford has attempted to fix the problem on customers’ vehicles with a variety of remedies but none have proved effective, according to the complaint.

“Given that the defect renders driving the subject vehicles a health hazard that is potentially deadly, the vehicles are valueless,” the lawsuit states.

The lawsuit alleges breach of implied and express warranty, violation of the New Jersey Consumer Fraud Act, of the Magnuson-Moss Warranty Act, and of the New Jersey Motor Vehicle Warrant Act, also known as the Lemon Law. Love that Lemon Law!!!

Capital One should change its tag line…from “What’s in your Wallet” to “If at first you don’t succeed.” These guys are frankly, incorrigible—nay—unrepentant. They are facing yet another robocalls class action lawsuit—this one against Capital One Financial Group. Filed by plaintiff Nakia Pitr, this latest lawsuit alleges Capital One is in violation of the Telephone Consumer Protection Act by calling consumers through robodialing without their consent. Yeah, know this one off by heart.

Pitre claims in the Capital One lawsuit that within the space of two months, she received 37 calls on her cellphone from the bank, despite not being a customer. Capital One ignored her requests to stop calling, she claims.

According to the lawsuit, the calls were from the company’s credit card division. During each of the calls she received and answered, she told the bank they had the wrong number and asked them to stop calling. However, she continued to receive calls. According to the suit, the frequency and nature of the calls indicates they were made from an automatic telephone dialing system.

Pitre further alleges she has never been a Capital One customer, has never given the bank her number or given her consent for them to call her.

If approved, the class would include anyone contacted by Capital One using a robodialing system from July 1, 2014, through July 2, 2015, without prior consent and who received calls after asking not to be contacted.

FYI—the case is Pitre v. Capital One Financial Corporation, case number 1:15-cv-00869, in the U.S. District Court for the Eastern District of Virginia.

Not a class action settlement—but a significant settlement none the less. Sadly, at great personal expense. Boston Scientific has been ordered to pay a $100 million settlement by a jury hearing the case of a women who suffered injury from the company’s Pinnacle and Advantage Fit vaginal mesh. Fifty-one year old Deborah Barba was awarded $25 million in compensatory damages with an additional $75 million in punitive damages.

In her personal injury lawsuit, Barba alleged she received a Boston Scientific’s Pinnacle mesh product in 2009 for pelvic organ prolapse (POP) and stress urinary incontinence (SUI). However, following the implant she began experiencing serious medical complications and despite two subsequent surgeries to rectify the problems, parts of the vaginal mesh implant remain in her body and continue to cause her pain.

The trial took just two weeks, after which the jury reached a decision within seven hours. They found Boston Scientific was negligent in designing and making the devices and that it had failed to warn patients and doctors about potential risks.

To date, this verdict is the largest regarding litigation over transvaginal mesh devices against Boston Scientific or any other mesh manufacturer. The company announced last month it had reached agreements to pay about $119 million to resolve 2,970 cases about transvaginal mesh. There are more than 25,000 defective product lawsuits pending against Boston Scientific concerning injuries resulting resulting from the Pinnacle mesh implant.

Reuters reports that this latest verdict is the sixth so far against the company by women who say that the devices are poorly designed and use subpar materials, resulting in painful physical injuries such as bleeding, infection and pain during sex.

That’s a wrap folks…See you at the Bar!