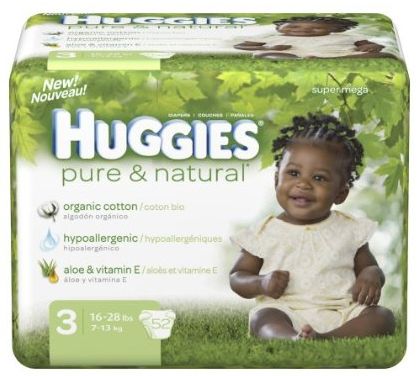 Maybe Huggies Not So Tree-Hugging After All? ….Huggies maker, Kimberly-Clark Corp, is facing a consumer fraud class action over allegations the company promotes its disposable diapers and baby wipes as “natural” baby products, when they are not only environmentally unfriendly, but also contain dangerous toxins.

The lawsuit contends that Huggies diapers are made with potentially harmful ingredients and that Huggies Natural Wipes contain two chemicals that have been either banned or restricted in other countries because they are considered hazardous to human health.

Specifically, the class action lawsuit alleges Huggies Natural Wipes are made with methylisothiazolinone, a chemical, the plaintiffs maintain, is associated with skin toxicity, immune disruption and allergic reactions. The substance, which may also act as a neurotoxin, has been restricted for use in cosmetics in Japan and Canada, according to the complaint.

“That the products are not natural, yet marketed and distinguished primarily upon this characteristic, is sufficiently deceiving to the customer,” the Huggies lawsuit claims. “The fact that evidence tends to indicate that products’ contents, in current and past iterations, may be hazardous only highlights the defendant’s deception. “Further, the plaintiffs claim Huggies Natural Wipes also contain sodium methylparaben, a substance which allegedly acts as an endocrine disruptor, immune toxicant and allergen, and has been banned entirely in the European Union. According to the lawsuit, the U.S. Food and Drug Administration limits the use of parabens in food and drinks, and, in an Environmental Working Group report cited by the plaintiffs the substance can reportedly “strip skin of pigment.”

Additionally, the plaintiffs contend that Huggies Natural Diapers are not a great deal different from standard diaper products because while they contain organic cotton, it is used on the outside of the diapers, and therefore never actually comes into contact with the baby. Jou and Young also claim that the liners of the diapers also contain several of the same unnatural, potentially harmful ingredients used in the company’s standard diapers, including polypropylene and sodium polyacrylate, therefore, they are not environmentally friendly.

“Defendant’s prominent representations on the packaging for the products deceptively mislead consumers into believing that Kimberly-Clark offers two natural, environmentally sound, and relatively safer product alternatives to traditional offerings,” the plaintiffs said. “While superficial differences do exist, these immaterial changes do not come close to matching a consumer’s reasonable expectation resulting from the company’s advertised benefits.”

Sadly, a Settlement for the Record Books. An asbestos verdict of $190 million has been awarded in a lawsuit brought by five men, three of whom are now deceased, who were exposed to asbestos-tainted products and equipment during their jobs as steamfitters, plumbers, and construction workers.

A panel of New York Supreme Court jurors found the two defendant companies had acted negligently and recklessly, then rendering a verdict worth a total of $190 million, the largest consolidated asbestos verdict in New York history. It is believed that the $60 million individual amounts two of the men received are the largest individual sums awarded in a New York asbestos case.

The jury found both defendants—boiler companies Cleaver Brooks and Burnham—negligent in having failed to warn about the dangers of the asbestos used in connection with their equipment. The verdict said both companies had acted with reckless disregard for human life.

All five of the plaintiffs were tradesmen from the New York tri-state area.

One man, from Toms River, NJ, worked in the 1950s and 1960s as a pipefitter in the Brooklyn Navy Yard. He was exposed to asbestos daily while fitting pipes into the salt-water distilling units aboard aircraft carriers like the USS Constellation and USS Independence.

Another, from Oyster Bay, NY, worked for nearly 30 years as a plumber, handling dozens of different types of products contaminated with asbestos.

A third, of Middle Village, NY, was also exposed to asbestos working as a plumber in Brooklyn, Queens, and Rockland County.

Another man, from Howard Beach, NY, was exposed to asbestos on the job as a painter and construction worker. He was involved with the removal and demolition of boilers containing asbestos-laden parts.

The final client, from Kent, CT, also worked with boilers and boiler parts in the course of his job as a steamfitter.

All five men developed asbestos mesothelioma as a result of asbestos exposure. Three have died of complications related to the disease.

Mini Makes Good….A preliminary settlement of a defective automotive class action has been approved, potentially ending the lawsuit pending against BMW over allegations the German auto-maker concealed a defect in the transmission of its Mini Cooper cars. But there a couple of details that BMW needs to clear up before the settlement is granted final approval.

US District Judge Philip S. Gutierrez, who is hearing the Mini Cooper complaint, (Aarons v. BMW of North America LLC, Case No. 11-cv-07667, in the US District Court for the Central District of California), has requested additional information about the class size and suggested some revisions to the existing preliminary settlement. However, if the Mini Cooper settlement is approved , thousands of Mini Cooper owners could be eligible to receive as much as $9,000 for vehicle repairs.

According to attorneys representing the plaintiffs, approximately 1,200 Mini Cooper owners had to have their transmissions replaced at BMW dealerships. However, many drivers took their Mini Coopers to a third-party facility for repair, and that number is not known.

The Mini Cooper lawsuit claims that the transmission defect, which can cause significant delays in acceleration, loss of forward propulsion and total transmission failure while driving, was concealed from Mini Cooper customers, by BMW. However, BMW, at the same time, allegedly issued bulletins to BMW dealerships acknowledging the defect. The transmission defects also included the failure of the transmission without warning. These failures and defects may have contributed to traffic accidents resulting in serious injury or death.

The plaintiffs further claim that in an effort to keep the prices of the Mini Coopers low, BMW sacrificed quality, thereby making cars of a substandard quality and putting consumers at risk.

Ok Folks, Have a safe and happy weekend—see you at the bar!