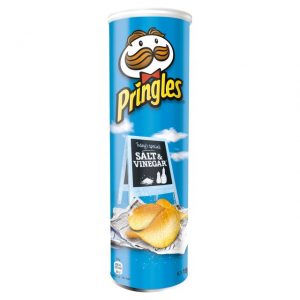 What’s in your Pringle’s Potato Chips? Perhaps something newfangled? This week, Kellogg got slapped with a consumer fraud class action lawsuit filed by consumers who allege its Pringles Salt and Vinegar chip packages falsely advertise that the chips have “natural” vinegar taste when they really contain chemical flavoring. No comment.

“Defendants’ packaging, labeling, and advertising scheme is intended to, and does, give reasonable consumers the impression they are buying a premium ‘all natural’ product with natural flavoring ingredients, instead of an artificially flavored product,” the complaint states.

The Allreds claim that the deceptive promotion and labeling of the product enticed them into paying more for what they thought was a premium product.

The Allreds allege that in 2016 they discovered that Pringles Salt and Vinegar chips contain largely artificial flavors, and that while the product does contain traces of real vinegar, it is only present in amounts too small to taste.

The chips’ flavor, the lawsuit alleges, comes from sodium diacetate and malic acid. Although both chemicals occur naturally, the Allreds say the chips contain the synthetic forms.

The Allreds want Kellogg to cease the allegedly misleading packaging and advertising, recall the chips, launch an informational ad campaign, and pay for damages as well as for the cost of the suit. They seek to represent a California class of consumers who purchased the chips in the past six years.

Seems it’s Black and White, After All. A $32.5 million settlement has been approved in a discrimination class action lawsuit pending against MetLife Securities Inc. The settlement will pay $25.35 million to some 690 class members, according to court documents.

The lawsuit was filed in May 2015 by lead plaintiff Marcus Creighton, who was a MetLife employee in Illinois from 2001 to October 2014. Creighton alleged the company was in violation of federal civil rights law by discriminating against black brokers. Specifically, the lawsuit alleged that MetLife provided very few opportunities for its African American financial services representatives to work with their non-black colleagues, that it restricted their training opportunities, and prevented them from getting good accounts.

The lawsuit states that MetLife is headed by a “nearly all-white” management team and maintains “a racially biased corporate culture and stereotypical views about the skills, abilities and potential of African-Americans that infect personnel decisions” and inform its policies.

The MetLife discrimination settlement fund will pay $75,000 to Creighton and $50,000 to six other workers who joined the case as named plaintiffs in an amended complaint filed in April 2016.

The settlement deal covers all black, US-based financial services representatives employed by or affiliated with MetLife or New England Life Insurance Co. between May 15, 2011 and July 1, 2016.

Prudential has Agreed to Pony Up… $12.5 million in an unpaid overtime class action lawsuit. If approved, the settlement would end claims brought Prudential employees in 12 states in litigation that has lasted more than a decade. Youza!

According to recently filed court documents, financial representatives working for Prudential filed the class action in September 2006 alleging the financial management company misclassified them as independent contractors so they were not compensated for overtime. Additionally, they were improperly deducted pay for use of offices, assistants, office supplies and insurance.

The plaintiffs alleged the deductions didn’t change their taxable earnings or their pension benefits, that Prudential had violated their contracts, and violated both the Fair Labor Standards Act and state labor laws.