An unpaid overtime class action lawsuit has been filed against all restaurant chains owned by Darden Restaurants, including The Capital Grille, Longhorn Steakhouse, Olive Garden and Red Lobster. Read more in our weekly wrap of top class action lawsuits and settlements for the week of September 7, 2012. 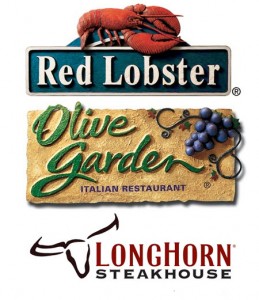 We want you to work but we don’t want to pay you… sound familiar? An unpaid overtime class action lawsuit has been filed against all restaurant chains owned by Darden Restaurants, including The Capital Grille, Longhorn Steakhouse, Olive Garden and Red Lobster.

The Darden Restaurants lawsuit was filed on behalf of Amanda Mathis, a Florida resident and former server at several Longhorn Steakhouse locations, and James Hamilton, a Virginia resident and former Olive Garden server in Georgia. In their lawsuit, the plaintiffs allege that servers such as themselves were paid less than the minimum wage and were not compensated for time they were required to work off the clock.

The overtime pay lawsuit contends that Darden violated the Fair labor Standards Act by paying many of its servers below the applicable minimum wage, which can be as low as $2.13 an hour for tipped work and $7.25 an hour for non-tipped work. It also alleges that servers were required to work off the clock at the beginning and end of their shifts. Isn’t that called “volunteering”?

The proposed class seeks to represent current and former servers employed between August 2009 and the present. Darden is considered the world’s largest full-service restaurant group, with almost 170,000 employees.

Chase chastised to the tune of $100 million…in settlement monies for improper loan and APR Rates. Preliminary court approval was granted this week, in a credit card class action lawsuit brought against Chase Bank over allegations that its loan and APR rates were increased improperly.

Specifically, the lawsuit, brought by Chase credit cardholders, claimed those customers accepted promotional loan offers whereby the loan was subject to a fixed interest rate (APR) until the loan balance was paid off in full. In November 2008 and June 2009, Chase sent some of these cardholders a “Change in Terms” notice, raising their minimum monthly payment from 2% to 5% of their outstanding account balance and, in some cases, applying a $10 monthly fee to their account.

Who Is Included in the Chase Credit Card Class Action?

The “class” for this lawsuit includes all persons or entities in the United States who entered into a loan agreement with Chase, whereby Chase promised a fixed APR until the loan balance was paid in full, and (i) whose minimum monthly payment was increased by Chase to 5% of the outstanding balance, or (ii) who were notified by Chase of a minimum payment increase and subsequently closed their account or agreed to an alternative change in terms offered by Chase.

Refunds on eBooks? Are you in line for some dosh? Check it out. A $69 million settlement has been reached in a lawsuit brought by US states and territories against Hachette, HarperCollins and Simon & Schuster over ebook pricing. According to Publishers Weekly, if the agreement for the eBook pricing lawsuit receives court approval, Hachette will pay $31,711,425, HarperCollins will pay $19,575,246, and Simon & Schuster will pay $17,752,480. The consumer fraud agreement includes fees and other costs to be paid by the publishers.

The eBook class action lawsuit centered around agreements made between publishers and Apple to move away from the industry’s traditional wholesale-retail model, in which retailers set the price of ebooks, to an agency model, in which the ebook stores served as agents that earned a percentage of each sale, allowing publishers to decide how much their ebooks would cost. Publishers who wanted to sell with Apple moved to a similar model with Amazon.

The settlement translates, at least to consumers, into refunds for ebooks purchased between April 1, 2010, and May 21, 2012, that had been priced according to the agency model.

According to report in the LA Times publishers will $1.32 for each bestselling title purchased by a consumers, 32 cents for books that were less than a year old but not bestsellers, and 25 cents for older e-books.

Refunds will appear in e-book buyers’ online accounts on iTunes, Amazon and Barnes & Noble. Readers who purchased e-books through Google or Sony’s storefronts will receive a check, and others can opt to. They can also opt not to receive any rebate at all.