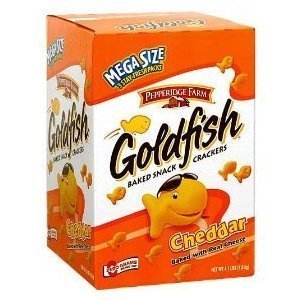 Something’s Fishy with those Fishy Crackers. Is nothing sacred? Pepperidge Farm is facing a potential consumer fraud class action lawsuit over the use of the word “natural” on the product label for its Cheddar Goldfish crackers.

Filed by Colorado resident Sonya Bolerjack, the fish cracker class action lawsuit alleges the company “mistakenly or misleadingly represented that its Cheddar Goldfish crackers are ‘Natural,’ when in fact, they are not, because they contain Genetically Modified Organisms (GMOs) in the form of soy and/or soy derivatives.” Specifically, Bolerjack claims that the product is not natural due because it contains soybean oil. Really?

The plaintiff is seeking certification of a class of “all United States persons who have purchased Pepperidge Farm Cheddar Goldfish crackers containing Soybean Oil, for personal use, during the period extending from November 6, 2008, through and to the filing date of this Complaint.” FYI—that was roughly, approximately, don’t quote me, around the 19th of November.

Remember Bear Stearns? Not fondly, I’ll bet. They were one of the first investment houses to fall in the 2008 financial crisis. Well, a while back they agreed to pony up $294 million to settle securities and ERISA  lawsuits and this week a federal judge approved those settlements. The lawsuits were filed against The Bears Stearns Cos. Inc, certain of its former officers and directors, and the company’s former outside auditor, over allegations they misrepresented Bear Stearns’ exposure to the subprime mortgage lending crisis. No comment.

This week, a federal judge ruled that the settlements are procedurally and substantively fair (In re Bear Stearns Companies Inc. Securities, Derivative, and ERISA Litigation, MDL No. 08-md-1963, No. 08-2793, S.D. N.Y.).

Medifast Told to Reduce the Hyperbole—after being put on a diet of honest advertising (?), which they didn’t stick to. And, they’ve been told to avoid all unsupported claims (otherwise known as consumer fraud) about the benefits of their weight loss products for the good of their future health. Yep—this week, Jason Pharmaceuticals, a subsidiary of Medifast Inc, and the Federal Trade Commission (FTC), agreed to a $3.7 million Medifast settlement resolving charges about the claims the company made about their weight loss products and programs.

Medifast-brand low-calories meal substitutes, including its most popular plan called the Medifast “5 and 1” plan that consists of 800-1,000 calories per day, are sold by Jason Pharmaceuticals. The FTC alleges the company made false and misleading claims about the success people have had with the programs, in achieving or maintaining weight loss or weight control. Notably, these claims were in direct violation of a ban imposed on the company in 1992, by the FTC. Each day the company violated the ban, it could be fined up to $16,000. And they were thinking maybe they wouldn’t get caught? Seriously?

In their case, United States of America (for the Federal Trade Commission), Plaintiff, v. Jason Pharmaceuticals, Inc., Defendant (United States District Court for the District of Columbia), Case No. 1:12-cv-01476, FTC Docket No. C-3392, the FTC claims Jason Pharmaceuticals made unsupported representations since at least November 2009. These claims implied or stated that using Medifast programs and products would allow consumers to lose 2-5 pounds per week. The company also represented that the experiences of consumer endorsers featured in the advertisements were typical, and that consumers would lose more than 30 pounds. So, we’re back to exercise and sensible eating? Not good timing, given the season.

And on that note—I’ll see you at the bar—the Turkey is calling! Have a great Thanksgiving weekend!