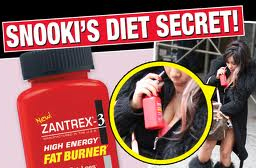 Is Snooki snookered? And maybe those of us using Zantrex? Christmas is not a good time to get the news that your diet pills may be snake oil. But, really, it shouldn’t come as a surprise. Snooki, of “Jersey Shore” fame, is facing a federal consumer fraud class action lawsuit over allegations she promoted the diet pill Zantrex knowing that the pills don’t work. http://www.bigclassaction.com/lawsuit/snooki-zantrex-diet-pills-consumer-fraud-class.php

Basic Research LLC, Zoller Laboratories, three of their officers, and Nicole Polizzi aka Snooki are named as defendants by lead plaintiff Ashley Brady, who claims Zantrex combines caffeine with herbs that are “unsafe and ineffective for weight control or appetite suppression.” Brady further alleges that the three officers have been ordered to cease and desist selling fraudulent weight-loss products.

So re: the Snooki Zantrex lawsuit, here’s the skinny—(couldn’t resist that one) Brady alleges she bought a bottle of Zantrex-3 in 2010 after reading the label’s claims stating the drug would provide “546% More Weight Loss Than America’s #1 Selling Ephedra-Based Diet Pill,” and that it would make her lose weight “without diet and exercise.” (OK, what’s your first clue.)

According to the lawsuit, “Snooki represents … that Zantrex is safe and effective for weight loss and fat loss,” the lawsuit states. “These representations are false, misleading and deceptive because … Zantrex is neither effective nor safe for weight loss nor fat loss.” The complaint states that Snooki is the face of the Zantrex brand, promoting it on her websites, on YouTube, Twitter and Facebook, and in celebrity gossip magazines.

Basic Research bills itself as “one of the largest ‘nutraceutical’ companies in the United States, with annual sales revenues in excess of $50 million,” the lawsuit states. Further, all three officers have come under fire for similar fraudulent schemes in the past. Defendant Dennis W. Gay is a principal and director of both Basic Research and Zoller; the FTC enjoined him in a similar case weight-loss fraud in 2006, according to the lawsuit. Additionally, defendant Daniel B. Mowrey was also enjoined from this conduct by the FTC’s 2006 injunction, and defendant Mitchell K. Friedlander, with Basic Research received a cease-and-desist order from the US Postal Service in 1985, also involving allegedly fraudulent weight-loss products, and a second USPS order involving bogus breast enlargement products, according to the lawsuit.

What’s that expression—“it’s the company you keep.”

What is this? Instant Replay? Almost. Following on the heels of a huge settlement by Visa and Mastercard in an antitrust lawsuit brought by thousands of small businesses across the US, (see below), a consumer banking class action lawsuit has just been filed against four major banks alleging they conspired to fix “interchange fees,” attached to the use of those same banks’ credit cards.

Those additional fees have cost consumers billions, according to the allegations. But I’m getting ahead of myself…

Not to sound cynical, but the list of defendants shouldn’t’ come as a surprise. They are JPMorgan Chase & Co., Bank of America Corp., Capital One FSB and HSBC Bank USA NA. The allegations are that they conspired with credit card companies to arrange or ‘fix’ the swipe fees charged to customers when they use their credit cards. The credit care fee lawsuit contends this has cost cardholders (you and me)—are you ready for this—over $54 billion in illegal credit card and bank fees annually. That would fund a few retirement but not ours apparently. No surprise, the class action claims this “price fixing” is in violation of the Sherman Act and the California Business and Professions Code.

The plaintiffs claim that they each purchased “thousands of dollars’ worth of goods and services and paid related Interchange Fees on Visa and MasterCard transactions at prices inflated by the Defendants’ price-fixing conspiracy over many years.” Further, because of these fees, the plaintiffs contend, they have purchased products at artificially inflated prices. According to the lawsuit, “This price-fixing conspiracy is ongoing and additional overcharge dollars are being extracted from Cardholders pursuant to the conspiracy every time they swipe their Visa and MasterCard payment cards.”

And—yes—there’s more—all this collusion has also resulted in a loss of competition from other cards, in that merchants were prevented, allegedly, from telling their customers that there were cheaper options when making a purchase

Entitled Salveson, et al. v. JPMorgan Chase & Co., et al., Case No. 13-cv-05816, in the U.S. District Court for the Northern District of California, the lawsuit claims “In furtherance of the conspiracy, Defendants and their co-conspirators also agreed to and have collectively imposed restraints on competition, such as so-called ‘Exclusionary Rules,’ ‘No Discount Rules,’ ‘No Surcharge Rules,’ and ‘Honor All Cards Rules,’ as well as Anti-Steering and other restrictions imposed upon merchants to the detriment of Cardholders,” the lawsuit states. The effect of these rules is such that merchants are prevented or prohibited from informing customers about the true costs associated with different forms of payments and from offering consumers an option to use a credit card with lower fees.

Specifically, “Through their common control of both Visa and MasterCard, Defendants and their co-conspirators have stifled competition between Visa and MasterCard and have thwarted competition from smaller competitor networks such as American Express and Discover,” the class action lawsuit states. “This reduction in competition among general purpose payment card networks has resulted in higher Interchange Fees, hindered and delayed the development and implementation of improved network products and services, and has lessened consumer choice.”

So these allegations, if proved true, would go along way to explaining how Visa and Mastercard can afford to pony up $5.7 Billion to settle an antitrust class action…but not everyone is happy with this settlement…

Visa & MasterCard Pay Up… A settlement has been approved in a credit card fees class action lawsuit, by a United States federal judge. The settlement is for an estimated $5.7B, between Visa Inc (NYSE:V) and MasterCard Inc . The lawsuit was brought by thousands of retailers who alleged the credit card companies fixed fees that are charged to merchants every time their customers made use of their debit or credit cards. Additionally, the lawsuit claimed that Visa and Mastercard prevented merchants from informing customers about other forms of payments that were considerably cheaper.

The judge’s approval came amidst objections from literally thousands of retailers who were complaining that this amount was inadequate. It is believed that this settlement is the largest in any United States antitrust class action.

The class action was initially brought against Visa, then Mastercard in 2005, with both companies accused of fee fixing. A fairness hearing was held in September. The original settlement amount was $7.2B but was reduced to $5.7B after thousands of merchants dropped out of the settlement deal. The updated Visa and MasterCard settlement provides for cash payments to merchants across the country and also permits then to start charging customers and additional fee whenever a Master or a Visa card is used.

The National Retail Federation’s general counsel, Mallory Duncan said in a statement that his organization which had opposed this deal was now reviewing the ruling that they are expecting to file an appeal.

Ok Folks, That’s all for this week. Happy Holidays, be safe, and we’ll see you at the bar in time for a toast to 2014!