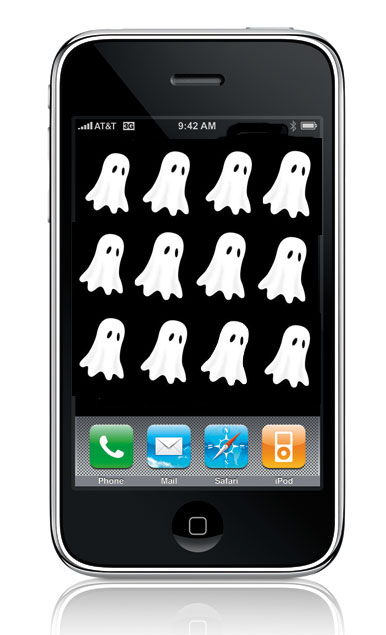 Here’s the kicker—Hendricks also alleges that “Not only does AT&T systematically overbill for every data transaction, it also bills for phantom data traffic when there is no actual data usage initiated by the customer. This was discovered by the same independent consulting firm, which purchased an iPhone from an AT&T store, immediately disabled all push notifications and location services, confirmed that no email account was configured on the phone, closed all applications, and let the phone sit untouched for 10 days. During this 10-day period, AT&T billed the test account for 35 data transactions totaling 2,292 KB of usage. This is like the rigged gas pump charging you when you never even pulled your car into the station.”

The class claims that though AT&T’s overcharges “have a modest effect on an individual customer’s bill, they have a huge effect on AT&T’s bottom line. AT&T has 92,8 million customers. In the fourth quarter of 2010, AT&T reported its wireless data revenues increased $1.1 billion, or 27.4 percent, from the year-earlier quarter, to $4.9 billion. A significant portion of those data revenues were inflated by AT&T’s rigged billing system for data transactions.”

The suit has a laundry list of complaints including breach of contract, unjust enrichment, unfair and fraudulent business practices, unfair competition, and violations of the federal Communications Act. Go get’em!

GSK Settles over Avandia Death… GlaxoSmithKline (GSK), has settled an Avandia lawsuit that alleged the diabetes medication caused the death of a North Carolina man. The suit was filed by the family of James Burford who died of a heart attack in 2006 while using the drug.

The settlement was arranged the night before GSK was due to go to court over the case, which is the first of some 2,000 pending Avandia lawsuits that allege GSK hid the health risks associated with the medication.

According to a report on Bloomberg, Mary Anne Rhyne, a U.S.-based spokeswoman for Glaxo, said in an e-mailed statement that the company settled the Burford case to avoid the risks and costs of litigation. The details of the settlement remain confidential.

FYI—the FDA announced Friday that it has “notified healthcare professionals and patients that information on the cardiovascular risks (including heart attack) of rosiglitazone has been added to the physician labeling and patient Medication Guide.This information was first announced by FDA on September 23, 2010 as part of new restrictions for prescribing and use of this drug.

Securities? Now there’s a misnomer… AXA Rosenberg Group (ARG) announced this week it reached a $242 million settlement with the Securities and Exchange Commission (SEC) over allegations of securities fraud that cost investors some $217 million.

The SEC charged three AXA Rosenberg entities with securities fraud for concealing a significant error in the computer code of the quantitative investment model that they use to manage client assets. The SEC’s order instituting administrative proceedings against the firms found that senior management at Rosenberg Research Center LLC (BRRC) and ARG learned in June 2009 of a material error in the model’s code that disabled one of the key components for managing risk. Instead of disclosing and fixing the error immediately, a senior ARG and BRRC official directed others to keep quiet about the error and declined to fix the error at that time.

Press statements indicate that compensation payments to adversely affected clients will be made. The aggregate compensation amount is approximately $217 million. AXA Rosenberg agreed to pay a civil penalty of $25 million, and to certain other terms related to ongoing internal oversight, recordkeeping, periodic policy reviews and the retention of an independent compliance consultant. The administrative order reflecting the details of the SEC settlement is available at www.sec.gov.