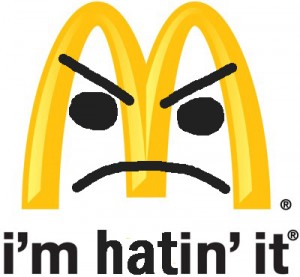 Supersize this baby! McDonald’s is facing an unpaid overtime lawsuit class action lawsuit brought by four former employees in the Los Angeles area. The lawsuit alleges McDonald’s Corp violated wage and hour laws by “requiring workers to work off the clock, placing their rest and meal breaks at the end of their shifts and not paying final wages in a timely manner.”

The McDonald’s lawsuit was originally filed by plaintiff Maria Sanchez in January 2013, but has subsequently been consolidated into a nationwide group of employment class actions against the fast food chain, all alleging illegal labor practices. The lawsuits claim that McDonalds’ managers falsified time records to erase certain employees’ actual hours of work, prohibited meal breaks, required unpaid work from employees before and after their shifts, and withheld overtime pay.

The lawsuit further alleges that McDonald’s Corporation has tried to reduce “labor costs by requiring its restaurants to limit labor costs to a specific percentage of gross sales, causing managers to violate state labor laws to keep costs in line.”

The case is Maria Sanchez et al., v. McDonald’s Restaurants of California Inc. et al., case number BC499888, in the Superior Court of the State of California, County of Los Angeles.

Is Merck & Co. Inc, full of S#$PF? According to a recently filed consumer fraud class action lawsuit—it would appear so. The lawsuit alleges the pharmaceutical company is overcharging for its Coppertone sunscreen products with Sun Protection Factors (SPF) of 55 and higher because they contain “virtually identical” active ingredients as the Coppertone SPF 50 products.

Filed by plaintiff Danika Gisvold, the lawsuit claims Merck is participating in a “false, misleading and deceptive” advertising campaign. Specifically, Gisvold alleges the US Food and Drug Administration has reviewed SPF ratings since 1978, and has found that SPF values over 50 don’t provide an increase in protection over SPF 50 products.

According to the Coppertone lawsuit, while SPF value is an indicator of the level of sunburn protection provided by the product, and consumers have learned over time to associate higher SPF with greater protection, the SPF 100+ products do not provide twice the ultraviolet B protection of an SPF 50 product.

“In fact, none of the sunscreen products in the Coppertone SPF 55-100+ collection provide any additional clinical benefit over the Coppertone SPF 50 products,” according to the complaint, which also notes that the FDA had voiced concern about labeling a product with a specific SPF value higher than 50. “The FDA’s findings are based on, inter alia, scientific tests that demonstrate SPF 100 sunscreens block 99 percent of UV rays, while SPF 50 sunscreens block 98 percent, an immaterial difference that provides no additional clinical benefit to consumers against sunburn.”

The Coppertone lawsuit alleges the only reason consumers would purchase an SPF product over SFP 55 is because they believe it provides greater protection than a lesser SPF product, therefore, Merck’s Coppertone SPF 55- 100 are overpriced. “As a result of Merck’s superior UVB protection claims, consumers, including plaintiff and members of the proposed class, have purchased products that do not perform as advertised,” the complaint states.

The plaintiff is seeking to represent a national class of plaintiffs claiming Merck’s representations of superior UVB protection are false, misleading and reasonably likely to deceive the public, and that Merck spreads the false claims through advertising inserts, the Internet and labels “where they cannot be missed by consumers.”

Of course, if you are really unsure about your SPFs, you could always wear long sleeves and a hat—but that just ain’t as sexy.

Specifically, the lawsuit states that Lowe’s treated the independent contractors as employees when they were retained to install garage doors. While Romines voluntarily dismissed the claims Shepard continued with the lawsuit, and the court certified certified a class of: “All persons who installed products for Lowe’s or performed services for Lowe’s in the State of California and who were treated as independent contractors by Lowe’s but over whom Lowe’s exercised control and discretion in the performance of their installation services.” The certified class period runs from 2008 to the present.

According to the Lowe’s lawsuit: “Specifically, plaintiffs assert that Lowe’s had the right to control, and in fact did control all aspects of installation services performed by Shephard and all other Type 1 and general contractor installers,” according to the settlement for preliminary approval proposed to the U.S Northern District Court of California, Oakland division.

“Plaintiffs further allege that Lowe’s misclassification of the installers caused harm not only to the installers who did not receive the benefits attendant with being treated as employees, but also resulted in harm to the installation companies that contracted with Lowe’s,” the lawsuit states.

In discussing the proposed Lowe’s settlement, Shephard’s attorneys write, “Shephard determined that if this action proceeded to trial and if Shephard prevailed on all of his claims, the maximum amount recoverable for the class would have been approximately $33 million. Shephard submits that a recovery of $6.5 million, or approximately 20 percent of the recoverable damages, is an eminently fair and reasonable recovery.”

It is estimated that some 4,029 individual installers and 949 installation companies are eligible to receive settlement funds, and “The maximum settlement amount equates to about $1,613.30 per settlement class member,” court documents state.

Ok, Folks—we’re done here—have a great weekend and we’ll see you at the bar!