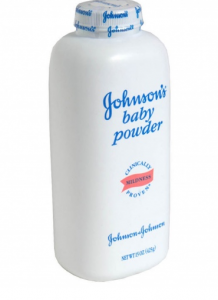 More Talc Powder Lawsuits…We’ve been seeing a lot about the Johnson & Johnson (J&J) talcum powder ovarian cancer lawsuits here in the US, but a class action lawsuit has now been filed in Canada against J&J alleging its Baby Powder product causes ovarian cancer.

The named plaintiffs in the Canadian J&J talc complaint all developed ovarian cancer following long-term use of J&J’s Baby Powder for feminine hygiene purposes. The representative plaintiffs in this case include, Marilyne Bernier who is the daughter of Thérèse Bernier, who died in March of this year following her battle with ovarian cancer, and Shaeda Farooqi of Mississauga.

According to the complaint, scientific researchers have established that over time, applying talcum powder to genitals, underwear, and sanitary napkins increases the risk of developing ovarian cancer by 33%. However, despite the evidence of a direct link, J&J has not acknowledged the connection and has kept its product on the shelves without warning.

The lawsuit aims to bring access to justice to the many women who have developed ovarian cancer due to long term use of Baby Powder and to modify behaviour of companies that place known carcinogens into the stream of the Canadian commerce without warning.

FYI—estimates suggest there are over 1,000 talc-powder induced ovarian cancer lawsuits pending in the US against J&J.

Uber Needs to Check the Definition of Stop? Wow—Uber just cannot stay out of trouble, it seems. It found itself on the end of another proposed class action recently, this one alleging violations of the Telephone Consumer Protection Act (TCPA).  The allegations? Uber sent text messages through an auto-dialer to people even after they had opted out of the messages by texting back “Stop”.

Filed by an Uber driver applicant, the lawsuit alleges the plaintiff provided his telephone number during the application process, which he did not complete. However, Uber then purportedly began sending him text messages asking him if he required help finishing his application.

According to the Uber lawsuit, the plaintiff replied to Uber, stating “stop” on numerous occasions because Uber’s automated system responded to these “stop” requests with a confirmation text stating “SMS from Uber is now disabled. To re-enable, reply START.”

Further, the lawsuit asserts after the plaintiff deleted his Uber rider account, Uber sent him another text message confirming he had deleted his account.

Here’s the skinny: On or around June 18, 2016, class members should receive at least one Ticket Code by email redeemable for two tickets for General Admission seating at designated concert events at Live Nation owned or operated venues, subject to availability and limitations.

The Class includes all consumers who (1) purchased tickets on Ticketmaster’s website (“Website”) from October 21, 1999 through February 27, 2013; (2) paid money to Ticketmaster for an OPF that was not fully refunded; (3) did not and do not opt out of the Class; and (4) were residents of one of the fifty United States at the time of their purchase, including persons who placed, and then cancelled, a ticket order without obtaining a full refund of the OPF. If you also purchased UPS delivery for your tickets, then you are also a member of the “UPS Subclass.”

For more information on the settlement and a list of guidelines regarding using your Ticket Code(s), please visit the official Settlement Website.

It would seem that Ticketmaster has mastered the class action settlement.

Ok, that’s a wrap folks…Have a good weekend. See you at the Bar!