Getting Burned on Fire Damage Claims? Los Angeles resident, Ismael Frias, believes so. He filed a bad faith insurance class action lawsuit against a Farmers Insurance Co., unit alleging it illegally limited coverage of wildfire smoke damage by not providing adequate notice that it had changed its policies and stating that the damage was “not actual fire damage.”

Frias, who lives in the suburb of Sylmar, states in his Farmers lawsuit complaint that Mid-Century Insurance Co., applied a “Wildfire Smoke Sublimit” of $5,000 to his claim under his homeowner’s insurance policy, without clearly notifying him. Mid-Century allegedly added the sublimit to the policy when Frias renewed in March, but failed to clearly notify him of the change. Additionally, the suit states that the sublimit is in violation of California insurance law which standardizes fire damage policies.

“The purported $5,000.00 Wildfire Smoke Sublimit violates Insurance Code section 2071, is not reflected on the declarations Page, is not plain, clear and conspicuous, and is unenforceable,” the lawsuit states. According to the complaint, Frias claimed for damages he experienced as a result of a wildfire on July 23, 2016. On that date, the massive Sand Canyon Fire was raging through the mountains north of Sylmar. Ultimately, the fire scorched almost 65 square miles before fire crews were able to contain it in August, according to the National Wildfire Coordinating Group.

Frias received a letter from Mid-Century in September, stating the damage to his home wasn’t “actual fire damage” and thus was subject to the $5,000 sublimit, according to the lawsuit.

Frias is claiming breach of contract, breach of the implied covenant of good faith and fair dealing, and violation of California’s Unfair Competition Act.

The lawsuit seeks to establish a class of California homeowners who had policies containing the wildfire smoke sublimit and who had submitted claims for wildfire odor, soot, smoke, char or ash damage. He also seeks compensatory and punitive damages, along with attorney’s fees, according to the complaint.

“As a result of defendants’ conduct, plaintiff and members of the class and subclass have been damaged, including but not limited to, paying insurance premiums for coverage rendered illusory by the unlawful Wildfire Smoke Sublimit,” the complaint states.

It’s VW Pay Up Time. It’s been a week of whoppers. Starting with a rather speedy settlement on the consumer end of the Volkswagen emissions scandal. Short version, a $14.75 billion settlement between consumers, the federal government and Volkswagen has been granted final approval. The deal includes an aggressive timeline for VW to begin buying back cars that have the infamous emissions cheating software, known as “defeat devices”.

Under the terms of the deal, VW will set aside $10 million to buy back its vehicles with the defeat devices from consumers.

Additionally, VW must spend $2.7 billion to mitigate the effects of the emissions from cars equipped the so-called defeat devices, and $2 billion over the next 10 years in projects that support the increased use of zero emission vehicles.

Starting in mid-November, Some 475,000 owners of affected VW and Audi 2.0L diesel vehicles will be able to seek buybacks of their cars or have them fixed. Additionally, most plaintiffs who bought their cars before last September, will receive payments of $5,100 to $10,000. About 336,000 car owners have registered for benefits under the settlement and only 3,300 have opted out, according to court papers signed by the judge.

Of note, 3.0 liter six-cylinder diesel vehicles equipped with the defeat devices are not included in this settlement. VW said it is still working toward a resolution with owners of those vehicles.

The multidistrict litigation is In re: Volkswagen “Clean Diesel” Marketing, Sales Practices and Products Liability Litigation, case number 3:15-md-02672, in the U.S. District Court for the Northern District of California.

The case was brought by Deborah Giannecchini of Modesto, California, who was diagnosed with ovarian cancer in 2012. She is one of nearly 2,000 women who have filed similar lawsuits, and thousands more are under review by lawyers.

Talc is a mineral often used to absorb moisture in cosmetic products. Since the 1970s, studies have suggested that talc could be linked to ovarian cancer, according to the lawsuit. Lawyers argued that Johnson & Johnson knew of those studies but put profits ahead of human life by continuing to market their talc products for feminine hygiene use. 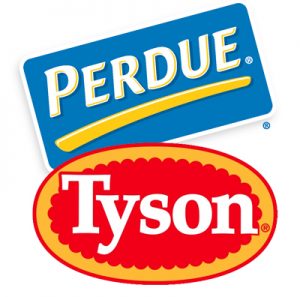 Don’t know what to say about this. Tyson and Perdue Farms are facing an antitrust class action lawsuit over allegations they engaged in a chicken price-fixing scheme. The lawsuit calls the industry’s means of destroying its livestock “unparalleled.” There are other terms that come to mind, but let’s get to the allegations.

Which are, specifically, that the companies were involved in killing hens and flocks and destroying eggs to limit production and raise the price of 98 percent of the chicken sold in the U.S. by nearly 50 percent.

The lawsuit, filed Sept. 14, 2016, in the U.S. District Court for the Northern District of Illinois, Eastern Division states that the laundry list of defendants control 90 percent of the wholesale broiler chicken market, an industry with more than $30 billion in annual revenue.

The Tyson and Perdue lawsuit describes in detail how the chicken industry conspired together to raise prices, stating that in 2007, Pilgrim’s and Tyson attempted to cut production levels enough to cause industry prices to rise, but failed to impact the market due to their market share.

“In January 2008 Pilgrim’s and Tyson changed tactics and concluded that only through broader cooperation among major producers in the Broiler industry could supply be cut enough to force prices to increase,” the suit states.

After attending the industry event, Tyson’s CEO announced Tyson would be raising prices because “we have no choice.” A day later, a Pilgrim’s executive announced publicly that Pilgrim’s would be cutting its production and “the rest of the market is going to have to pick-up a fair share in order for the production to come out of the system.”

According to the lawsuit, unlike Pilgrim’s and Tyson’s prior production cuts, in 2008 the defendant chicken producers did not rely solely on ordinary mechanisms to temporarily reduce production, which would have permitted production to be quickly ramped up if prices rose.

Walmart & Sam’s Club Head into OT (Sort of…) Hey, football season just started up so forgive the pun… So there’s a couple of nice unpaid overtime settlements to report this week. First up…Walmart and Sam’s Club. They were facing an unpaid overtime class action lawsuit brought by certain employees who worked at the big box retailers. The plaintiffs asserted that they were not paid for missed meal and rest breaks or for off-the-clock work while employed by Walmart.

The potential class of plaintiffs in the lawsuit who may be entitled to benefits from the settlement is approximately 187,000 current and former hourly Pennsylvania employees at Walmart of Sam’s Club.

The Walmart settlement amount is $62.3 million in statutory damages.

Farmers’ Time to Pay Up. And…a $4.9 million settlement has been reached in an unpaid wages and overtime class action pending against Farmers Insurance Exchange.

The lawsuit was filed by Farmers’ adjusters in February 2014, who claimed that their work volume, deadlines and competitive rankings meant they frequently worked overtime without meal and rest breaks. It also claimed that up to 2015, Farmers had no stated break policy. Farmers’ practices violated state and federal overtime statutes, as well as California meal and rest breaks and unfair competition laws.

Under the terms of the Farmers settlement, the funds will be divided among the 2,114 plaintiffs, less 25 percent to cover legal fees.

The class is made up of claims representatives specializing in liability, automotive damage and residential property who worked in California between September 2011 and August 2016. On average, I is estimated that each plaintiff will receive $2,000, and members who worked throughout the class period could see more than $7,000.

Ka Ching! That’s a wrap folks—see you at the Bar.