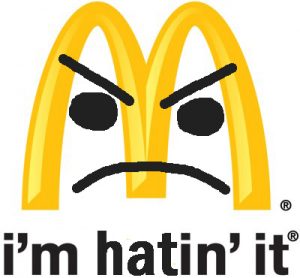 What are They up to Under Those Golden Arches? A Chicago McDonald’s franchisee is facing a consumer fraud class action lawsuit filed by a customer who alleges the restaurant is charging 41 cents more for the two cheeseburger “Extra Value Meal” than what it would cost if customers ordered all the items in the meal separately.

McDonald’s Extra Value Meal consists of two burgers, fries and a drink, and cost the plaintiff, James Gertie, $5.90 per meal, in Des Plaines and Niles, Illinois. These two McDonald’s restaurants are part of a chain of more than 10 such restaurants owned and operated by the Karis Group, according to the complaint.

According to Gertie, he purchased a Two Cheeseburger Meal from at least five of Karis’ McDonald’s restaurants in Des Plaines and Niles from Oct. 14 to Nov. 13. Each time Gertie was charged $5.90 for the meal, the complaint states.

Gertie alleges in his McDonald’s lawsuit that posted menu prices indicated the restaurants would have sold Gertie and other customers two cheeseburgers for $2.50, a medium order of French fries for $1.99 and a medium soft drink for $1, for a total of $5.49. That’s a difference of 41 cents less than the posted price for the Extra Value Meal, according to the lawsuit. That 41 cents could really add up…

“Defendant, the operator of several McDonald’s restaurants, advertised for sale a food combination designated as an ‘Extra Value Meal’ but the combination actually costs more than if each item were bought separately, thus making it no ‘value’ at all, let alone an ‘extra value,’” the lawsuit states

They say it’s the pennies that count.

Some Good News from Some Bad News. A jury in Ohio has awarded $2 million in compensation against DuPont in the first of some 40 environmental toxin cases pending against the chemical company over allegations it dumped toxins into the air and drinking water of the Ohio River, causing illness to people in the surrounding area.

This settlement resolves allegations brought by plaintiff Kenneth Vigneron that DuPont de Nemours & Co, through its actions, caused his testicular cancer. Vigneron’s lawsuit is part of multidistrict litigation involving some 3,500 people who allege that over a period of decades, DuPont released perfluorooctanoic acid, also known as PFOA or C8, into the environment of the Ohio River at the Washington Works site.

According to the plaintiffs, internal studies done by DuPont, which date back for years, strongly indicate that C8 was dangerous. For decades, C8 was used as an essential component in the manufacture of well-known nonstick cookware and coatings. Today, it has been phased out in most US manufacturing.

Six bell weather cases were completed earlier this year, two of which resulted in jury verdicts of $1.6 million and $5.6 million, the latter including punitive damages. DuPont is appealing both verdicts.

While DuPont has been fighting allegations of toxic dumping causing illness, residents of both Ohio and West Virginia claim they have suffered a variety of health problems as a result of their exposure to the chemicals. Further, a Dutch investigation makes similar claims alleging the drinking water near DuPonts’ Dordrecht plant in the Netherlands was contaminated with C8, and that DuPont had been exposing people living near the plant to the toxin for as much as 25 years.

Earlier this year, the judge hearing the cases ordered DuPont to turn over documents related to the Dutch investigation to the American plaintiffs, saying the information about the company’s conduct in a similar situation could be helpful for arguing punitive damages or refuting arguments that the chemical giant has taken a proactive stance on safety concerning C8.

The punitive phase of Vigneron’s trial will be heard in 2017. The case is In re: E.I. du Pont de Nemours and Co. C-8 Personal Injury Litigation, case number 2:13-md-02433, in the U.S. District Court for the Southern District of Ohio.

IKEA Dresser Settlement. Here’s a positive, yet disturbing settlement. Ikea agreed this week, to pay $50 million to the three families of toddlers who were killed when defective Ikea dressers toppled onto the children. This is the positive bit.

The children’s deaths prompted an unprecedented recall of 29 million dressers, at which time Ikea acknowledged the dressers were at serious risk of tipping onto and killing children. And this is the disturbing bit.

The first death from an unstable Ikea dresser occurred in 1989, with a further six deaths to follow. According to the lawsuits, the Ikea dressers were “defective and dangerous” and that the Sweden-based retailing giant continued to sell them despite the risk, while not properly warning consumers.

Reportedly, the IKEA dresser settlement came shortly after Ikea gave the parents’ attorneys internal documents it had long fought to keep confidential. Under the settlement, the contents of those documents will remain private and will be returned to Ikea, with the stipulation that the company not destroy them.

The plaintiffs include Janet McGee, whose 22-month-old son Theodore died last February when a Malm dresser fell on him, and the parents of 2-year olds Curren Collas and Camden Ellis, both of whom died in 2014.

Each of the three families who filed wrongful death lawsuits will receive an equal share of the $50 million with an undisclosed share going to the attorneys.

As well, Ikea has agreed to make $50,000 donations to three children’s hospitals in the name of the boys, one of which will go to the Children’s Hospital of Philadelphia in memory of Curren Collas.

That’s a wrap folks! Happy Holidays to you and yours. See you at the bar.